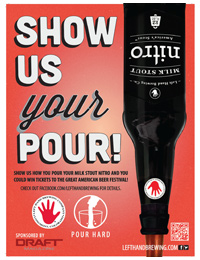 LONGMONT, CO — Left Hand Brewing Company is inviting all craft beer fans to show off their take on the infamous hard pour of Milk Stout Nitro in a bottle. The Colorado beer gets its name from the addition of Nitrogen which gives Milk Stout Nitro a much smoother, creamier mouthfeel, versus the traditional CO2 variety of Milk Stout. However, Left Hand fans know that to achieve the DRAFT quality of Nitro, they must master the brewery’s signature instructions to “Pour Hard.”

From day one of Milk Stout Nitro’s release, Left Hand has spread the word that this unique beer requires an equally unique pour. In order to recirculate the settled Nitrogen, drinkers must literally pour hard, holding the bottle at a 90┬░ angle and letting the beer slosh into a 16oz. glass. In turn, Milk Stout Nitro cascades beautifully, building a creamy, thick head. The result is not just a beer that tastes great but one that is exciting to pour and watch as well.

Since the Nitro bottles inaugural debut during the 2011 Great American Beer Festival in Denver, craft beer fans across the U.S. have been eager to pick up a six pack of their own. Early 2012, Left Hand launched its national rollout of the brand, bringing the beer to an initial seven cities outside of Colorado. Now, Left Hand Brewing Company and DRAFT Magazine invite fans to join the Nitro experience with Show Us Your Pour, a Facebook contest featuring fans’ uploaded videos of their spin on the Milk Stout Nitro hard pour.

Left Hand & DRAFT encourage Nitro lovers to showcase their sense of fun and creativity as they put their stamp on the Nitro pour. “Milk Stout Nitro is a cornerstone of the craft beer culture as it is not only a great tasting stout, but really beckons consumers to become educated partners in the final product. As a brewery we’re excited to involve our fans and show off their take on the proper Nitro pour,” said Aly Dratch, Marketing & Design Manager for Left Hand. Participants will upload their video via the Show Us Your Pour app available on the Left Hand Brewing Company Facebook page. The contest will be active until May 25th, upon which the fan with Left Hand’s favorite pour will win tickets to the Great American Beer Festival, along with a year subscription to DRAFT Magazine and luggage provided by Mountainsmith!

Dark & delicious, America’s great milk stout will change your perception about what a stout can be. Pouring hard out of the bottle, Milk Stout Nitro cascades beautifully, building a tight, thick head like hard whipped cream. The aroma is of brown sugar and vanilla cream, with hints of roasted coffee. The pillowy head coats your upper lip and its creaminess entices your palate. Initial roasty, mocha flavors rise up, with slight hop & roast bitterness in the finish. The rest is pure bliss of milk chocolate fullness.

Celebrating eighteen years of brewing a well-balanced portfolio of craft beers, Left Hand Brewing Company is located at 1265 Boston Avenuein Longmont, Colorado. The brewery has received 17 medals at the Great American Beer Festival and 8 medals at the World Beer Cup, and its beers are now available in 27 states. “Sometimes you’re not in the mood for what everyone else is having.”

DRAFT delivers the stories you won’t find anywhere else. Exploring everything from the little-known pub down the street to selective breweries here and abroad and all other imbiber’s interests – food, travel, sports, technology, entertainment, and leisure – DRAFT combines a fun and quippy style with unparalleled knowledge to deliver the definitive resource for the beer lover’s lifestyle. Look for DRAFT on finer newsstands across the country, including Barnes & Noble, Borders, Hastings and more.

Mountainsmith’s commitment to innovation began in 1979 and continues to the present with a full line of active-lifestyle products including backpacks, adventure travel luggage, storage systems, dog packs, camera packs and our classic lumbar packs. “Forged in the Rockies, Forged for Life.”