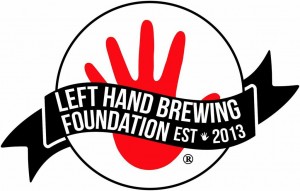 LONGMONT, CO – December 6, 2013 — Left Hand Brewing has had a monumental twentieth year. In addition to winning three gold medals at the Great American Beer Festival and halting production due to the Colorado floods, the company gave back to the community by contributing nearly half a million dollars in aid throughout the year. In recognition of Left Hand’s 20th year, the brewery proudly established the Left Hand Brewing Foundation and raised $449,822 for community causes and emergencies! Events and promotions hosted by the Left Hand Foundation included:

Located within 100 ft. of the raging St. Vrain River, LHBC experienced the devastation of the CO Flood first hand, closing its doors for four days as the surrounding waters rose. In immediate response, the Left Hand Brewing Foundation redirected the focus of Longmont Oktoberfest to CO Flood Relief, in addition to facilitating a Text to Donate campaign and retailing CO Flood donation merchandise. With great thanks to the community, the Left Hand Brewing Foundation raised $70,604 for CO Flood Relief, directly contributing $15,302 each to Longmont Meals on Wheels and HOPE for Longmont as well as $20,000 each to the OUR Center and the St. Vrain Habitat for Humanity.

Bike MS is a two day / 150+ mile bike ride raising funds and awareness for the National Multiple Sclerosis Society. Guided by Left Hand leadership, Team Left Hand Brewing is a community team of 160 riders comprising of teams in Colorado and the newly added Carolina team. In 2013, both teams collectively raised $269,814 for the NMSS, as well as taking top honors for Best Corporate Team in Colorado and Best Rookie Team in the Carolina.

In addition to LHBC projects, Left Hand funded $30,811 in retail value of in-kind donations to local charities, bringing Left Hand’s final community contribution to $449,822. This Friday, Left Hand will continue their service efforts as the team joins Habitat for Humanity, working on repair projects for local homes. “Contributing positively to our community is an integral piece of Left Hand’s culture.” comments Josh Goldberg, LHBC Events and Community Manager, “We are proud to be a company that gives back to where we live, work and play.”

Celebrating twenty years of brewing a well-balanced portfolio of craft beers, Left Hand Brewing Company is located at 1265 Boston Avenue in Longmont, Colorado. Left Hand is one of the most honored and recognized breweries in the state, with over 21 Great American Beer Festival medals, 8 World Beer Cup awards, and 6 European Beer Star awards. Famous for their Nitro series, Left Hand Brewery is also the first and currently the only craft brewery to release a bottled Nitrogen beer. Left Hand’s collection of perennial and seasonal beers are available in 26 states. “Sometimes you’re not in the mood for what everyone else is having.”

Founded in Left Hand’s 20th year, the Left Hand Brewing Foundation (LHBF) is committed to brewing a stronger community where we work, live and play. The LHBF affords Left Hand Brewing, in partnership with the Longmont Community Foundation, the opportunity to respond quickly and efficiently, with a directed act of support, for issues and emergencies important to the Longmont community and beyond.