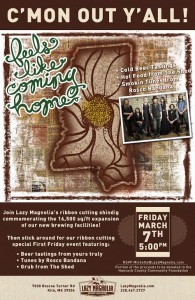 Kiln, MS – On Friday, March 7, 2014, Lazy Magnolia Brewing Company will celebrate the completion of their new brewery expansion with a ribbon cutting ceremony and their advancement from Micro Brewery to Regional Brewery. Join the owners of Lazy Magnolia, Mark and Leslie Henderson, as well as the entire Lazy Magnolia family to dedicate the new building and celebrate a milestone event for Mississippi.

This investment underscores Lazy Magnolia’s dedication to Mississippi and the art of producing great beer to be enjoyed by fans of craft beer everywhere. This expansion is just one more step in Lazy Magnolia’s growth strategy. With the help of their Mississippi Distributors, Lazy Magnolia has seen sales in Mississippi grow from 386 BBL in 2005 to 3450 BBL in 2013, with expected sales of more than 4000 BBL in 2014. In 2013 Lazy Magnolia had total sales of 15,701 BBL becoming Mississippi’s first Regional Brewery. “This expansion will allow us to increase our distribution across the Southeast, and export true Southern Romance all across the Country,” said Leslie Henderson. Some of the new expansion areas include: Ohio, Missouri, North Carolina, Virginia, West Virginia, Chicago, and Washington D.C.

The new facility adds 16,500 square feet with two loading docks, the largest beer fridge in Hancock County, a hospitality area centered on a front porch, and new cellar space capable of housing twenty 240 Barrel Fermenters. The expansion will allow Lazy Magnolia to more than double its current production and add another 20 jobs in Hancock County. It is a welcome addition to the original facility that has been operating at nearly full capacity since late 2011.

The dedication ceremony kicks off at 5pm, with Lazy Magnolia’s signature First Friday event to follow. Beer stations will be set up for guests to sample a variety of Lazy Magnolia beers. Award winning Barbeque, from The Shed in Ocean Springs, will be available to all guests. Lazy Magnolia donates a portion of the event’s proceeds to local charities. This event will benefit the Hancock County Community Development Foundation—a non-profit umbrella supporting numerous charities in South Mississippi.

General admission to the event is $15. Guests will receive a Lazy Magnolia beer glass, samples of up to 12 different beers and a tour of the brewery. Entertainment for the night will be provided by Gulfport Music Festival headliner, Rosco Bandana. Lazy Magnolia is honored to welcome these Mississippi natives home for a celebration that will be remembered for a lifetime.

Lazy Magnolia Brewing Company is Mississippi’s Oldest Brewery, best known for their flagship beer, Southern Pecan Nut Brown Ale. The brewery was founded in 2005 with a mission to bring craft beers with Southern flair to the Gulf South. Started by Leslie and Mark Henderson, a husband and wife team, the brewery now distributes beer in 10 states, and employees nearly 30 people—exporting Southern romance one pint at a time.