As part of its 2013 commitment to buy an additional $250 billion in U.S. products over 10 years, Walmart said it has inked a deal with Harlem Brewing Co. for placement at 39 New York locations.

“Our customers tell us that where products are made is most important second only to price,” Scott Markley, Walmart’s senior media relations manager wrote to Brewbound in an email. “With changes in energy costs and labor costs overseas, it is increasingly cost effective and efficient to manufacture closest to the point of consumption, helping Walmart respond to trends and customer demand. And it is just good business.”

Walmart, who sought out Harlem Brewing after seeing a TV interview with owner Celeste Beatty, will begin stocking the company’s Sugar Hill Golden Ale next month, according to the New York Post.

“Craft beer is a growing category for Walmart,” a spokesman told the outlet.

Harlem expects the new retail placement to increase sales by “as much as 20 percent,” Beatty told the Post.

Brooklyn Brewery has nine years left on its lease in Williamsburg and chief operating officer Eric Ottaway isn’t sure if the company will be able to re-sign.

“We know our ability to renew is zero,” Ottaway told Crain’s New York.

Ottaway cited soaring rent and ongoing redevelopment as reasons why the brewery could be forced out of the Williamsburg neighborhood in 2025.

“What is tricky is finding a space where we can do the manufacturing but also have the retail be an important component,” Ottaway told the outlet.

The brewery is reportedly eying the Brooklyn Navy Yard or Industry City, but in a blog posted to the Brooklyn Brewery website, the company called those reports “greatly exaggerated.”

“You may have heard in the past couple days that we’re looking to leave Williamsburg. Let’s be clear: we’re not leaving. It’s true that our lease is up in nine years, but that’s nine years away,” the company wrote.

Recall that Brooklyn Brewery is also still in talks to build a 200,000 sq. ft. facility in Staten Island.

“We hadn’t begun our plans to expand on Staten Island. Black Ops still didn’t exist. A lot can happen in nine years, and we’re not going to commit ourselves to predicting the future,” it added.

Brewpubs in Iowa are one step closer to selling 32 oz. growlers to consumers. A senate committee last week passed the so-called “Growler Freedom Bill,” but the legislation still needs approval from the house of representatives.

The bill is currently being studied and could pass through the house in 2017.

More Hard Soda is on the Way 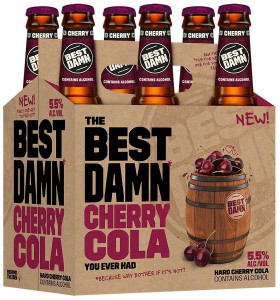 And A-B isn’t the only company aggressively pursuing sales in the space. Seagram’s recently introduced a line of flavored hard sodas — Cherry Cola, Grape Soda, Lemon n’ Lime and Orange Cream varieties his shelves next month. Pabst, meanwhile, is continuing to innovate within its Not Your Father’s Root Beer line — a Vanilla Cream Ale label, obtained by BeerStreetJournal.com, appears to have received approval from the TTB.

And while most Brewbound readers would argue that the Coney Island and Not Your Father’s Root Beer product shouldn’t be classified as “craft,” their inclusion in Nielsen’s data set sure boosts category trends. For the four-week period ending January 30, craft — including those two brands — was up 10.9 percent according to the research firm. Excluding hard soda, however, craft was only up 3.5 percent.