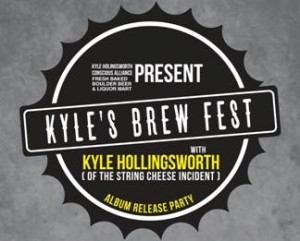 On Saturday, August 9th at Liquor Mart in Boulder, CO, KYLE HOLLINGSWORTH Band and other special friends will treat fans to a beer festival and album release party, plus a selection of more than 60 craft beers from more than 30 breweries. SPEED OF LIFE will be available for purchase only at KYLE’s Brew Fest prior to the album release date. KYLE’s Collective Distortion IPA, Hoopla Pale Ale, Happening Now Session IPA and unique collaborations from HOLLINGSWORTH and select breweries will also be on hand. Tickets are on sale now at www.kylehollingsworth.com and at Boulder Theater box office (2032 14th St, Boulder, CO 80302) for $25 through Wednesday, June 25 at 11:59pm MT, prices will increase thereafter. All proceeds benefit Conscious Alliance.

-Tasting from more than 30 craft breweries

-An opportunity to bid at the Silent Auction (which features rock memorabilia from the scene’s favorite artists, among other items)

-Food will be available for purchase

About SPEED OF LIFE

SPEED OF LIFE–out August 19 on SCI Fidelity Records–marks the third solo album from KYLE HOLLINGSWORTH, keyboardist of The String Cheese Incident. It was inspired by all facets of his life–from beer to babies to music to mayhem–and ranges stylistically from ‘60s funk to modern electronica, featuring both instrumental and lyrical tracks. It was recorded during the well-known Boulder, CO flood of 2013, where HOLLINGSWORTH was holed up in studio, fearing water would pour onto his gear. SPEED OF LIFE brings together feature performances from many great artists and friends Hollingsworth has surrounded himself with over recent years including Dave Watts (drums – The Motet), Garrett Sayers (bass – The Motet), Dan Schwindt (guitar), Jason Hann (percussion – The String Cheese Incident), Michael Kang (guitar – The String Cheese Incident), Dominic Lalli (saxophone – Big Gigantic), Bonnie Paine (vocals – Elephant Revival), Gabriel Mervine (trumpet – The Motet), Matt Pitts (saxophone — The Motet), Kim Dawson (vocals — The Motet), and LaDamion Massey (vocals).

Thirty years ago, with a wealth of desire and incredible ability, Hollingsworth set out on a career in music. Today, as a versatile member of acclaimed jam masters The String Cheese Incident, Hollingsworth is revered by both peers and fans for his ability to write and perform in a mosaic of styles, from rock to classical, ragtime to bebop. Playing in SCI has bestowed on him the kind of fearlessness a composer needs to flirt with such disparate genres.