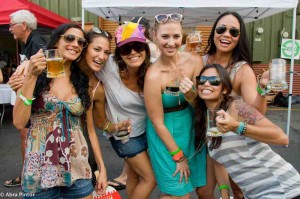 Kailua-Kona, Hawaii — The 19th annual Kona Brewers Festival will indulge both craft beer aficionados and foodies alike on Hawaii’s Big Island Saturday, March 8, 2014 from 2:30 to 6:30 pm. The annual fundraising event, held rain or shine on the beach and luau grounds at King Kamehameha’s Courtyard Kona Beach Hotel in Kailua-Kona, taps up brews from 40 of the country’s best breweries and serves them alongside a host of island cuisine from 40 Hawaii chefs.

Kona Brewers Festival is presented by Alaska Airlines, First Hawaiian Bank and Keauhou Veterinary Hospital, and began almost 2 decades ago as an anniversary celebration for Kona Brewing Company. The festival grew each year as did the number of charities supported by the event, and today more than 2,000 people attend. In fact, Brewfest tickets often sell out within a week, so craft beer lovers are encouraged to start making travel plans before the year’s end.

The Kona Brewers Festival main event is the culmination of a multi-day celebration that includes a pairing dinner and benefit art auction on Thursday, March 6 at the Kona Sheraton Resort and Spa at Keauhou Bay; a charity golf tournament on Friday, March 7; and the Run for Hops race Saturday morning, March 8.

40 breweries from Hawaii and the mainland United States tap up lagers and ales, ranging in style and flavor to delight the palate of thousands of craft beer connoisseurs. Chefs from 40 of the Big Island’s top restaurants serve sweet and savory tastes of island-style food, from fresh fish and barbecued meats to decadent desserts. A hula and oli (chant) kick off the event. A stage with live music entertains festival-goers throughout the day. The annual Trash Fashion Show, designed to raise awareness of the importance of recycling and reusing, shows off whimsical attire made entirely from recycled material.

Tickets to the Kona Brewers Festival main event on Saturday are available in advance only. Cost is $75 and includes a commemorative event mug, ten four-ounce brew sample pours, unlimited

samplings of gourmet cuisine and an afternoon of entertainment. Tickets are available for purchase online late January at the event website for a $5 fee.

A special beer and food pairing dinner, the Brewers’ Pa’ina will be Thursday, March 6, from 6 to 8:30 pm and jumpstarts the weekend of craft beer tasting. The ocean-side feast is served under the stars at the exquisite Kona Sheraton Resort & Spa at Keauhou Bay, and each course is expertly paired with Kona Brewing Company beers. Most dishes feature fresh, locally sourced ingredients and incorporate craft brew in the recipes. Art and culture of Hawaii will also be featured through live entertainment and a silent art auction. Proceeds benefit nonprofit organizations working on behalf of children and the environment. Check the festival website for more info and purchasing information.

The eighth annual Kona Brewers Fest Golf Open tees off Friday, March 7, with a shotgun start at 9 am. Golfers of all levels are welcome to play at this four-person scramble using the Peoria scoring system, a popular format for one-day friendly tournaments because it evens the competition. The $150 ticket price includes 18 holes of golf, greens fees and cart, welcome bag, continental breakfast, box lunch and awards ceremony with pupus. Check the festival website for more info and registration.

The day of beer tasting takes off with a running start at the “Run for the Hops” 5K / 10K run/walk on Saturday, March 8, at 7:30 am. Presented by Bike Works and benefiting Peoples Advocacy for Trails Hawaii (PATH) along with other BrewFest beneficiaries, the run begins and ends at BMW of Hawaii. Entry fee is $25 and includes a commemorative T-shirt, refreshments, award ceremony and beer tasting following the race. Check the festival website for more info and registration.