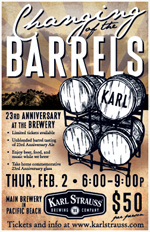 SAN DIEGO, CA – The NY Times recently listed San Diego’s thriving craft beer scene as a top place to visit noting that “Long established craft breweries like Karl Strauss Brewing CompanyÔÇªhave mentored brewmasters and created demand for some seriously off beat ales”. Karl Strauss is proud to have played a major role in securing that reputation. As a pioneer in the local beer community, Karl Strauss is celebrating its 23rd Anniversary with the 2nd annual Changing of the Barrels event on February 2, 2012. This intimate event takes place inside the main brewery in Pacific Beach and will debut the release of the 23rd Anniversary Old Ale.

Changing of the Barrels is limited to 100 ticket holders who will be the first to try the 23rd Anniversary Old Ale and have the exclusive opportunity to taste the 24th Anniversary Flanders Red Ale before it goes into barrels for 12 months. In addition, there will be several specialty beers on tap, food from MIHO Gastrotruck, live music by Blackout Party, and the chance to mingle with the Karl Strauss brew crew. Guests will leave with a commemorative snifter glass.

“Last year was the first time we did this event and everyone who came had a great time,” says Paul Segura, Karl Strauss Brewmaster. “This event is cool because it takes place inside the brewery and it’s a chance for us to show off our barrel aging program.” Guests who attended last year’s event can taste how the 23rd Anniversary Old Ale has evolved after a year in the bourbon barrels and make notes on next year’s beer for future comparison.

The 23rd Anniversary Old Ale was aged for 12 months in American oak barrels and is the first Karl Strauss barrel-aged beer to be offered unblended. It’s loaded with complex layers of toffee, molasses, dried figs, and toasted oak. A pronounced warming bourbon flavor contributes to the beer’s 12.2% alcohol content—making this strong ale an ideal after dinner sipper or accompaniment to desserts like bread pudding. The company only bottled 413 cases of this beer, encouraging fans to enjoy one now and lay another down several years. “This beer is only going to get better with age,” saysSegura. “As time passes, the bourbon character will mellow and more of the dried fruit and vanilla flavors will come out.”

The 23rd Anniversary Old Ale will be available on tap at all six Karl Strauss Brewery Restaurants and select beer bars across Southern California, beginning February 2, 2012 until it runs out. 22oz bottles will be available throughout California beginning early February. To purchase tickets to the Changing of the Barrels anniversary event, visit www.karlstrauss.com. Share it, cheers.

When we started brewing back in 1989, the closest thing in town to an English-style Old Ale came in a paper bag. Twenty-three years later, we like to think we had something to do with improving the local beer selection in San Diego. Our 23rd Anniversary Old Ale is indeed “old ale,” after spending a full year in American oak bourbon barrels. The result is an unblended and unmistakably complex strong ale with rich layers of toffee, molasses, dried figs, warming bourbon, and toasted oak. Save a bottle. Like us, this one gets better with age.

Changing of the Barrels Event details:

What’s included: beer for the night, MIHO Gastrotruck food ticket, live music, a commemorative 23rd Anniversary snifter, and a 33 Beers tasting book. This is also the only chance to try the 24th Anniversary Flanders Red Ale before it goes into barrels for 12 months.

Karl Strauss Brewing Company is celebrating 23 years of brewing in San Diego. From humble roots, a big vision, and the desire to share handcrafted beer with America’s Finest, Karl Strauss has grown from one brewery restaurant to a local institution—brewing 39,400 barrels in 2011 and operating six successful brewery restaurants across Southern California. The company has not strayed from its pioneering roots with innovative beers in the Karl’s Coastal Reserve Series and the new Karl’s Imperial Collection , while still capturing hearts—and the 2010 WBC and GABF gold medals—with long-time favorites like Red Trolley Ale. With distribution solely in California, Karl Strauss is ranked #44 on the list of the country’s top craft breweries. For more information visit www.karlstrauss.com or call the brewery at (858) 273-2739.