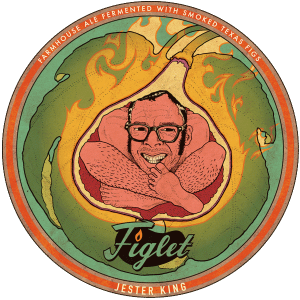 Austin, TX — We’re very excited to introduce Jester King Figlet, brewed in collaboration with the world famous Franklin Barbecue in Austin, Texas! We love working with local artisans doing exceptional and creative things in the food and beverage world, and Franklin Barbecue is of course no exception.

The original impetus for this collaboration came from the filming of an upcoming episode of BBQ With Franklin, which will air on KLRU-TV, Austin PBS. Aaron Franklin set out to explore the use of smoke in beer making for the episode. We wanted to branch out beyond the traditional use of smoked malt and opted to take a local ingredient that was in season — Texas figs — and use it as a medium to impart characteristics from Franklin’s barbecue pits into the beer. Local figs were caramelized with heat and cold smoked at Franklin Barbecue. Aaron charred a portion of the figs, which imparted a subtle burnt, almost leathery, character to the beer. The base beer was designed to integrate the flavors and aromas of the smoked figs with our house fermentation characteristics, which stem from mixed culture fermentation with a blend of brewer’s yeast, wild yeast from the Texas Hill Country, and native souring bacteria. While we typically brew beer with a sizable majority of pilsner malt in the grist, in this case our Head Brewer Garrett Crowell opted for a base of Dark Munich malt, which he felt complemented the smoky and lightly caramelized character of the figs.

Figlet was brewed in early July of 2014 with Hill Country well water, barley, oats, and hops. It then underwent a long-term fermentation over the course of four months, first in stainless steel and then in bottles, kegs, and casks. As is the case with all our beer, the aromas and flavors are largely created by giving a diverse array of microorganisms, many of which are native to our land in the Texas Hill Country, the ample time they need to work with each other (or against each other!) to create unique characteristics inexorably tied to our land. During the last few weeks of the stainless steel portion of the fermentation, the smoked figs were added to the beer and allowed to referment. During this process, the sugars in the figs were broken down by yeast and bacteria. Through refermentation, the aromas and flavors of the smoked figs were transformed, integrated, and elevated in a way that we believe is greater than the sum of their parts. Figlet is 6.2% alcohol by volume, 1.006 specific gravity, and had a pH of 3.7 at the time of bottling in early September.

Figlet will be released at Jester King Brewery when our tasting room opens at 4pm on Friday, November 21st. It will be available by the glass, as well as to go in 750ml bottles ($12, limit 2 per customer per day). Approximately 3,500 bottles are available, and at this point, we do not anticipate Figlet being available outside of Jester King, apart from a few special events. The label art for Figlet was done in house by our own Josh Cockrell.

We’d like to offer a very special thank you to Aaron Franklin for working with us to create our collaboration beer, as well to KLRU-TV, Austin PBS for documenting the process!