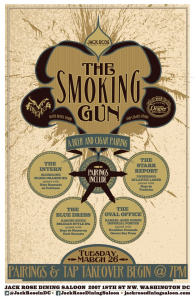 WASHINGTON — More than 6,000 craft beer enthusiasts and industry professionals will soon descend on Washington, DC in search of the best beer around, and Jack Rose Dining Saloon is pulling out all the stops to showcase its carefully curated beer selection. The Craft Brewers Conference(CBC) has chosen to host its annual show in the increasingly-popular small brew destination of DC from March 26-29 and Jack Rose is hosting a week of exciting, beer-focused events to celebrate.

Equipped with 20 brand-new 304 surgical-grade stainless steel draft lines which run from rooftop terrace to saloon bar, Jack Rose and beer director Nahem Simon will be pouring some of the best beer in the city that week. From a ‘Game of Thrones’-inspired “Feast of the Iron Throne” beer dinner featuring Ommegang’s new brew collaboration with HBO, to a K Pop-themed “Gnomegangnam Style” beer party, and even an “Epic” 20-tap takeover from Utah’s Epic Brewing Co., it’s sure to be an “epic” four days at Jack Rose during the CBC.

Gnomegangnam Style: 5-10pm on the Terrace.

Everyone is encouraged to put on their best Psy costumes and get ready for some K Pop, because Jack Rose is hosting a “Gnomegangnam Style”rooftop party from 5-10pm. Jack Rose will have $6 drafts of Gnomegang, a special seasonal release Belgian Strong Ale from Ommegang Brewery in Cooperstown, NY. There will also be dancing, prizes for best Psy costumes & Gangnam Style dancing.

‘Game of Thrones’ fans rejoice: Jack Rose is hosting a six-course feastshowcasing Ommegang’s newest release with HBO, the show-inspired Iron Throne beer which is set to be publicly released in late March. The feast will also feature a variety of show-inspired eats like stews and meats-on-the-bone, each paired with a different unique Ommegang brew.

The 6-course feast with beer pairing will be hosted in Jack Rose’s dining room and is available at $75 per ticket (plus tax and gratuity).

DC beer lovers are invited to join the owners of some of the country’s top breweries for a Craft Beer Tour of 5-6 of DC’s finest beer establishments – one of the premiere stops being Jack Rose. From 6-11:30pm in Jack Rose’s Balcony Room, guests can chat with the owners of 21st Amendment, Elysian, Uinta and more and taste rare specialty beers. The ticket also includes food specials and a gift bag with a specialty beer glass from Spiegelau.

An “epic” conclusion to CBC week, Jack Rose’s 20 brand-new taps will be overtaken by some of the most unique, hard-to-find beers from Utah’s Epic Brewing Co. Starting at 5 pm, both floors will feature the following specialty Epic brews:

Jack Rose Dining Saloon is a true DC establishment crafted from the minds of DC natives & longtime friends Bill Thomas and Stephen King. Jack Rose Dining Saloon houses the largest whiskey collection in the Western Hemisphere – over 1400 bottles of hand-selected single malt, blended, international and domestic will find our main saloon bar that seats up to 35 and a full-service dining room. Hosting your own event? Our second floor has an elegant private dining lounge with it’s own balcony and fireplace. If you’re in the mood for something more casual, hang out on the open-air terrace and enjoy snacks from the BBQ Pit or grab a drink on the Back Porch Bar…feeling like hiding out?… head down to the Prohibition Bar “no secret knock” required.

At Jack Rose Dining Saloon, one can sense the ties and tributes between the region, and the long history of the spirits that line the shelves.scotches. The saloon also carries an incomparable selection of bourbons & other spirits, and serves uniquely hand-crafted cocktails, wines from around the world, and over 20 beers on draft. The two-story destination offers distinctly different experiences throughout: the downstairs dining saloon for restaurant guests, the private upstairs balcony room, the glass-enclosed terrace bar and back Tiki bar. Jack Rose is located at 2007 18th Street, NW in Washington,DC.