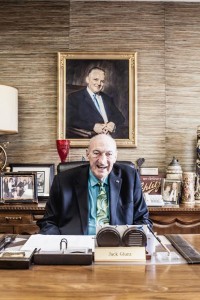 SPRINGFIELD, IL — John P. (Jack) Glunz, President and Owner of Louis Glunz Beer, Inc. in Lincolnwood, Illinois, was presented with the prestigious Richard A. Mautino Industry Service Award. The presentation was made on September 16, at the Associated Beer Distributors of Illinois (ABDI) 76th Annual Convention held at the Hilton Lisle/Naperville Hotel in Lisle, Illinois, which was attended by over 120 industry professionals.

Mr. Glunz learned the family business and the importance of customer service at an early age working, alongside his late father, Louis Glunz II, in the 126-year-old family-owned and operated business. He joined the company’s management team in 1957, and took over the beer division in 1969. During Mr. Glunz’s more than five decades as a beer executive, he has successfully built Louis Glunz Beer, Inc. from a Schlitz-only beer distributorship to a premier beer distributor with a portfolio of 665 beers from 172 brewers worldwide.

Mr. Glunz served as ABDI President in 1972-1973, on the ABDI Board of Directors, many ABDI committees, and numerous other community-based boards and committees. “Jack is a person of great integrity who was instrumental in guiding ABDI through the years. We are fortunate he and his children are still active,” said Bob Myers, president of ABDI. When accepting the award, Mr. Glunz said, “I am a beer distributor and proud of it.”

The award is given for outstanding contributions to the beer distribution industry. The award is named in honor of the late Richard A. Mautino, who was Vice President of Mautino Distributing Co. in Spring Valley, Illinois, and served nine terms in the Illinois General Assembly. Nominations are submitted by ABDI Distributor Members and comments such as, “Has passed on to the next generation the leadership, vision, and passion for the industry,” “Embraces changes in technology, is prepared for the next trends in the industry, and invests in the future with education of family, employees, and customers,” and “He leads with his honesty, integrity, and faith,” were made on his behalf.