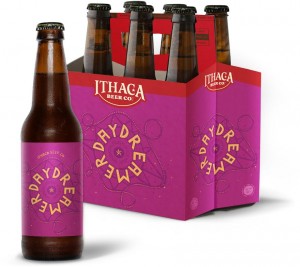 Ithaca, N.Y. – Ithaca Beer Co. kicks off its 2015 Seasonal offerings with Ithaca Daydreamer, an American style Kolsch. Originating from Cologne (Köln), Germany, the Kölsch style was historically only brewed along the Rhine (Rhein) River and fairly light in alcohol at 4.5-5.5% abv.

Daydreamer offers the unique character of traditional German Kolsch yeast and the blend of Pilsner, 2-Row, and German malts resulting in a pleasantly fruity, bready and slightly sweet aroma. While traditional Kolsch beers are typically lower in alcohol, we punched up Daydreamer to a warming 7% a.b.v. But despite Daydreamer’s strong a.b.v. backbone, the complex blend of malts, hops and yeast provide a smooth and clean mouth feel for a clean, easy drinking experience. Daydreamer pours near clear, vibrant yellow in color and with a white fluffy head.

Head of Brewing Operations Andrew Hausman says “We wanted to make a Kolsch that stood out from the rest, but can still be identified by its traditional German heritage. There are several secrets, with the yeast being the most special. The challenge for us was working with a rare yeast from Köln that requires a high degree of skill and craftsmanship. We’ve been astounded by the results since day one. The unique fruity complexity is unlike anything we’ve ever created.”

Ithaca Daydreamer will be available on draft in bars and restaurants and in 12 oz. bottle 6 packs in stores until early Spring.

Ithaca Beer Co. is an award-winning craft brewery founded in 1998 in the upstate town of Ithaca, nestled in the heart of the Finger Lakes region of New York State. More information about Ithaca Beer can be found at www.ithacabeer.com