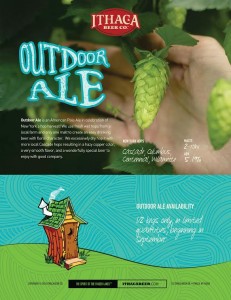 Around mid-August, Ithaca’s brewers were giddy with excitement for New York State hop harvest season. They packed into a pick-up truck, headed about 50 miles north and west of Ithaca to Pedersen Farm in Seneca Castle and collected 450 pounds of fresh Cascade, Cetennial and Willamette hops. Then, our brewers raced back to the brewery to start the boil for Outdoor. “With all the rain we got, it was a banner year for growing hops,” brewer Mike Bank noted, “This year’s Outdoor Ale is teeming with so much hop flavor and aroma. We were jamming pounds of fresh hops into just about every vessel and step possible in the brewing process. This year might just be the best batch to date.”

But why stop there? One week later, Brewer Andrew Hausman went back to Pedersen Farm to collect dry hops from that very same harvest and added them to Outdoor in the fermenters. “Traditionally, this beer has been made with only fresh hops. Dry hops from the harvest are not usually available around the same time as the fresh. This year is a landmark change in our brewing of Outdoor,” said Hausman

For Ithaca Beer, Outdoor Ale marks the end of the Summer, is a celebration of verdant abundance, and is our company’s homage to one of the four key ingredients of beer brewing: the hop – a complex and pungent flower made up of strig, bracteoles, and lupulin glands. The hop is a sacred ingredient for brewers.

Ithaca Beer Co. is an award-winning craft brewery founded in 1998 in the upstate town of Ithaca, nestled in the heart of the Finger Lakes region of New York State. More information about Ithaca Beer can be found at ithacabeer.com