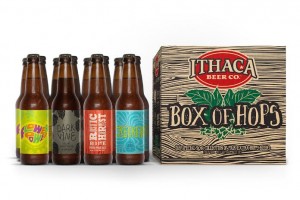 ITHACA, N.Y. — Ithaca Beer Co. is unleashing full hop fury once again with the 2nd annual release of Box of Hops officially in the Taproom on Wednesday, October 22nd. This four-beer variety pack was so popular last year–selling out in record time, we brought it back, and this time recharged with a new red rye IPA called Rustic Harvest.

To promote this very limited release around northeastern states, Ithaca Beer hasTap Takeovers and pub crawls to showcase all four brands. Check back ithacabeer.com and Ithaca Beer social media to find out more about the events.

MORE ABOUT EACH BEER INSIDE BOX OF HOPS:
Flower Power — IPA:
Our wildly popular IPA is simultaneously punchy & soothing with a big body finish that boasts pineapple and grapefruit.

Rustic Harvest — Red Rye IPA: A pale ale that boasts in your face hops and rye with a big earth and spice aroma that is fun, balanced, and ready to invade your taste buds.