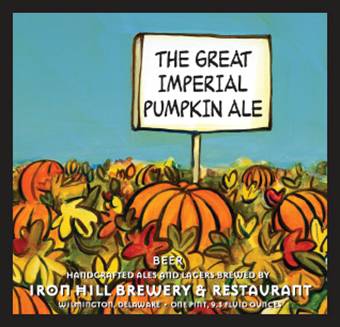 WILMINGTON, Del. — On Saturday, September 7, beginning at 1 p.m., all 10 regional Iron Hill Brewery & Restaurant locations will celebrate the end of summer and the beginning of a new season with the annual release of The Great Imperial Pumpkin Ale.

Pumpkin lovers will be able to enjoy The Great Imperial Pumpkin Ale both on draft and to take home in 750 ml bottles.

“Pumpkin beer was one of the earliest beer styles dating back to colonial times. Pumpkins were a native plant and the fermentable sugars from the meat of the pumpkin took the place of malt, which wasn’t readily available. Today, pumpkin beers have become one of the top seasonal styles in the country and The Great Imperial Pumpkin Ale is something we look forward to sharing every year,” says Director of Brewing Operations Mark Edelson.

The Great Imperial Pumpkin Ale is a hearty autumnal beer brewed with more than 200 pounds of pumpkins, as well as pumpkin pie spices, molasses and Belgian candi sugar, giving it a rich flavor and heady aroma, evocative of all things fall. Throughout the season, the beer will be sold on draft and as a Bottled Reserve, Iron Hill’s line of cork-finished 750 ml bottles, for $19.50. The Great Imperial Pumpkin Ale bottles feature a custom-designed label from local artist Jeff Schaller, inspired by thebeloved comic strip Peanuts.

Founded by home brewers Kevin Finn and Mark Edelson and restaurateur Kevin Davies in Newark, DE in 1996, Iron Hill Brewery & Restaurant has blossomed from one restaurant and brewery to 10 locations across the mid-Atlantic, with plans for eight to 12 more outposts in the next three to five years. Their acclaimed beers have accumulated a wealth of awards from the nation’s top beer festivals, and their restaurants have earned more than 150 “Best of” nods from local and national publications.