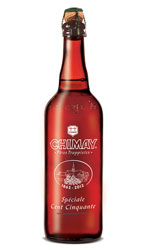 PHILLIPSBURG, NJ — Hunterdon is pleased to announce they have successfully sold through their entire allocation of Chimay Spéciale Cent Cinquante in less than one week. Distribution commenced on September 17, 2012, making New Jersey the first market in the United States to release this highly-limited anniversary ale. By September 21, 2012, the distributor had shipped approximately 500 cases to restaurants and retailers across the state.

Production of Chimay Spéciale Cent Cinquante was limited to a mere 12,500 cases for the entire world, with only 2500 allocated to the United States. Because of Hunterdon’s long-standing relationship with Chimay and their importer, Manneken-Brussel Imports, the distributor was able to obtain twenty percent of that shipment for the New Jersey market. Other U.S. markets receiving this commemorative brew include Virginia, Florida, California, Kansas, New York, Massachusetts and Puerto Rico.

Spéciale Cent Cinquante (“150” in French) is the brewery’s first release in approximately forty-six years and only the fourth style to be sold commercially. Chimay’s three other signature styles, Grand Réserve, Premi├¿re and Triple, are some of the most respected and highly-rated beers in the world. Cent Cinquante is a ten percent strong golden ale packaged in a beautiful collectors-edition screen-printed 750ml bottle and will only be brewed once this lifetime.

Hunterdon began their relationship with Chimay via Manneken-Brussel Imports in 2006 and is now one of their top ten distributors in the country. In the past six years, Hunterdon has grown the brand immensely in the state of New Jersey in both the retail and restaurant segments.

The growth of the on-premise division is particularly strong. In 2006 the exposure of Chimay on draft in New Jersey consisted of merely one establishment. Hunterdon now sells over one hundred kegs of Chimay per month to an average of fifty restaurants in the state. On-Premise Manager Jeff Rancan states, “Chimay is by far one of the most successful brands we carry when it comes to repeat business. The quality and demand of the beer speaks for itself, but add to that the incredible profit margin that restaurants can obtain makes the restaurant owner reluctant to replace it with anything else.”

This week Hunterdon will introduce two styles of gift packs from Chimay. The brand new “Trilogy” sampler pack includes one bottle each of the Grand Réserve, Premi├¿re and Triple in 750ml format. In addition, the original Chimay gift set which includes the same three styles in 330ml format plus a commemorative Chimay 150th Anniversary goblet will also be made available. Beer enthusiasts can also look forward to the release of Chimay Vintage Grand Réserve coming later this year in a special collector’s-edition bottle.

Consumers should head out to their local retailers to grab a bottle of Spéciale Cent Cinquante before it’s gone for good. Please visit the Great Brewers website for a complete list of retailers. In addition, please stay tuned with Hunterdon via Facebook and Twitter and on the company’s website for news about upcoming Chimay 150th Anniversary celebrations.

Hunterdon has raised the bar for craft beverage availability and selection in the state by providing the most diverse and sought-after portfolio the market has to offer. Founded in 1996, the company currently represents over sixty domestic craft brands, hundreds of imports and a unique line of micro-distilled spirits, sakes, ciders and meads. Owners Mike Short and Dave Masterson continue to focus on bringing quality products to the New Jersey consumer.