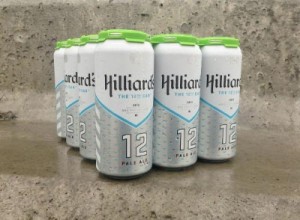 SEATTLE — In an auspicious twist of fate, and months before the Seattle Seahawks hit the NFL playoffs, Seattle’s Hilliard’s Beer crafted a one-of-a-kind, seasonal pale ale in tribute to Seattle’s famous “12th Man” fan base. Now, as the Seattle team preps for what the franchise hopes to be their first Super Bowl victory, Hilliard’s Beer is proud to have created the ultimate football watching beer for the ultimate fans. Having devoted the better half of the NFL season to the creation of this particular seasonal offering, the Hilliard’s Beer team worked in shifts, spending 12 hour days brewing and canning tallboy 12-packs of ‘The 12th Can’ beer just to make sure fans would have enough to drink come Super Bowl Sunday.

The idea for ‘The 12th Can’ came when Seattle Sports Radio 950 KJR publicly asked for a local beer dedicated to the country’s loudest fans. Hilliard’s Beer answered the call, and in September 2013 [in time for the first game of the season] the popular session pale ale was born. To date, the young brewery has sold more than 300,000 ‘The 12th Can‘ tallboys throughout the Pacific Northwest. “We knew from the start we’d be in for an incredible season, and wanted to make sure fans had ‘The 12th Can’ from the first game all the way to the Super Bowl. ” co-founder Adam Merkl commented.

‘The 12th Can’ has less alcohol content than many craft beers allowing consumers to enjoy it before, during and after the game. Brewed with Cascade Hops — or C-Hops as they’re known around the brewery — along with Maris Otter and Crystal Malts, the beer has an unmistakably Northwest flavor and as Hilliard’s says, it “pairs well with victory.”

About Hilliard‘s Beer
Hilliard’s has recently completed two years in the marketplace. With a focus on excellent, craft beer in cans made with the best ingredients available, Hilliard’s can be appreciated by both the informed and informal beer drinker. Hilliard’s Ballard Taproom has become one of Seattle’s ‘go-to’ spaces for beer, food trucks, and events which is a nod to the spirit of the brew—Accessible, Well-Made, and Hard-Working. http://www.HilliardsBeer.com