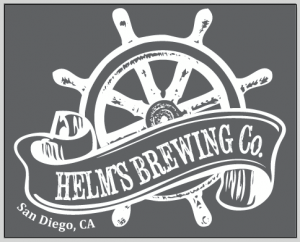 San Diego, CA-Helm’s Brewing Company makes the jump into fall this Friday September 26th, 2014 with the release of their Pumpkin Amber Ale, “Samuin Harvest”. Named after the original fall/winter festival that influenced many Halloween traditions today, this Pumpkin Amber Ale incorporates the fall season and is a favorite among Helm’s regulars. This beer celebrates the fall season with many fall classic ingredients including ginger, nutmeg, cinnamon, brown sugar and of course pumpkin. Helm’s Brewing will be holding a beer release event at their tasting room to celebrate this new beer.

Helm’s Brewing Company produces high quality and innovative craft beer designed not only to impress the connoisseur beer drinker, but also provide a fresh and local beer experience for the average consumer. The tasting room includes two 46” televisions to watch sports and is wide open to allow customers to view the brewery equipment as they enjoy a pint of beer. The tasting room is part of the community brewery concept where people can stop by after work, grab a beer on the weekend and enjoy conversation with friends.