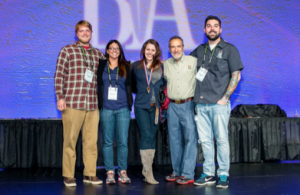 A total of 5,500 beers were entered into various different categories, but only 270 were awarded medals. Each brewery is limited to only 5 entries, reducing the statistical chance of winning a coveted medal to less than 2%.

In the Golden or Blonde Ale category, 90 beers were entered, but only two received medals. There was no gold medal awarded, 5 Rabbit Golden Ale by 5 Rabbit Cerveceria took home the silver, and Gold received the bronze.

Also at the recent Maryland Brewers’ Cup on September 20th, Gold took home the bronze medal for the Best of Show and a gold medal for the Category One — Gold/Blonde Ale in the 2014 Comptroller’s Cup awards.

According to Marketing Director, Fred Crudder, “Heavy Seas is proud of every beer we make, but recent accolades for Heavy Seas Gold are especially appreciated. It requires a great deal of skill to brew such a light-bodied beer, while maintaining the full flavor of a true craft beer. Heavy Seas Gold is also one of our oldest recipes, and the recent interest in more sessionable beers will benefit from people rediscovering this amazing golden ale.”