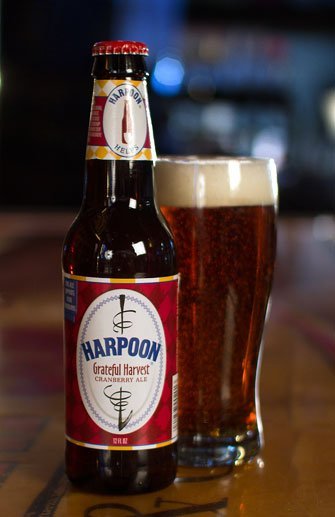 Boston, MA — The Harpoon Brewery is proud to bring back Grateful Harvest Ale, a New England cranberry ale brewed in the Thanksgiving spirit of giving back to the community. For every 6-pack of Grateful Ale sold, the Harpoon Brewery will make a $1 donation to the local food bank in the area in which the beer was purchased.

Harpoon Grateful Harvest Ale is a beer brewed with Thanksgiving celebrations in mind. Freshly harvested cranberries, donated by local cranberry farm A.D. Makepeace, lend a subtle tartness to the beer. The cranberry flavor complements the malty character derived by the combination of Munich and Vienna malts. Additions of CaraMunich and Dehusked Carafa III malts enhances the beer’s reddish hue and adds a touch of sweetness, while Northern Brewer bittering hops complement the slight cranberry tartness. A traditional top fermenting strain of ale yeast was used to showcase the malt profile and accent the fresh cranberry aroma. The result is a medium-bodied, malty and mildly sweet amber ale with a bready aroma and a subtle cranberry flavor.

The idea for Harpoon Grateful Harvest Ale was born out of the relationships the brewery has cultivated with New England food banks throughout the years. This beer will help raise desperately needed funds for the fight against hunger, with $1 from every 6-pack sold going to the local food bank in the area in which it was purchased. Since the beer was first released in 2010, Harpoon has donated more than $84,000 to local food banks from the sales of Grateful Harvest alone. A blog post about the beer can be found here: http://www.harpoonbrewery.com/blog/2338/Grateful-Harvest-is-Here.

Harpoon Grateful Harvest Ale will be available on tap at the brewery’s Boston, MA and Windsor, VT facilities. For every pint of Grateful Harvest sold at the breweries, Harpoon will make a $1 donation to their local food bank. In addition, a special pumpkin spice pretzel will be sold at the Harpoon Beer Hall in Boston, with $1 for each pretzel sold going to the local food bank.

On Sunday, November 10th, Harpoon will host the Harpoon Helps Grateful Harvest Dinner at their beer hall in Boston. It will be a twist on the traditional Thanksgiving meal, with recipes for each dish developed by Harpoon employees. 100% of ticket sales will be donated to the Greater Boston Food Bank.

Harpoon was founded on two principles: to make great beer and to be good neighbors within their community. Since the brewery bottled its first beer in 1986, Harpoon has endeavored to make meaningful contributions to causes that are important to them and their customers. What started as beer donations here and there, hosting fundraisers for friends from time to time, and producing small fundraisers, has developed into one of the brewery’s most cherished programs: Harpoon Helps. So far in 2013 alone, the Harpoon Helps program has raised more than $445,000 for local charities, donated more than 50,000 pints toward local charity events with approximately 300 local non-profits supported, and has performed thousands of volunteer hours at local organizations.

Harpoon Grateful Harvest Ale will be available in bottles from early October through early December. This beer is an ideal beer for the Thanksgiving season.

About the Harpoon Brewery

The Harpoon Brewery was founded by beers lovers, Rich Doyle and Dan Kenary. In 1986 Harpoon was issued Brewing Permit #001 by the Commonwealth of Massachusetts, since it was the first brewery to brew commercially in Boston after a dormant period of about 25 years. Harpoon’s line of craft beer features its award-winning IPA and UFO Hefeweizen beers, along with four special seasonal selections. In 2000 Harpoon purchased a second brewery in Windsor, VT, making Harpoon the 9th largest craft brewer in the US. Harpoon has since introduced a line of limited edition beers, the 100 Barrel Series, the Leviathan Imperial IPA, as well as the all-natural Harpoon Cider made from freshly pressed, local apples. For more information about Harpoon beers and visiting the breweries, visit www.harpoonbrewery.com.