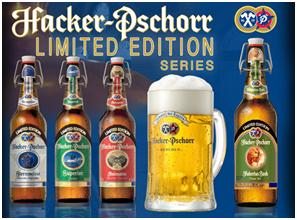 LITTLETON, CO – Long known in the U.S. for its Weisse and Original Oktoberfest, as well as Munich Gold and Weisse Dark, Munich-based Hacker-Pschorr Brewery is expanding its U.S. offerings with a limited-release specialty beer series consisting of four small batch beers, brewed and packaged specially for variety-thirsty U.S. beer lovers. All four beers will be available on draught and in collectible half-liter, 16.9 oz., swing top bottles.

The first in the series, Hubertus Bock, will reach retailers in March 2014, followed by Sternweisse in May, Festbier in August, and Animator in November. Each beer will be brewed to order in a single small batch and completely allocated to retailers who place pre-orders. Retailers who wish to carry Hubertus Bock should place orders with their local Hacker-Pschorr distributor immediately.

“Hacker-Pshorr has been in the U.S. since the 1800s,” said Charles Stanley, the U.S. brand manager for Hacker-Pschorr, “so we’ve seen peoples’ beer preferences change over time. It’s important to adapt to those changes, but do it without losing your identity. Until fairly recently, most beer drinkers had a go-to brand or style that they drank consistently, and our lineup of year-around beers catered to that. But now more and more beer enthusiasts want variety, which gives us an opportunity to show off the excellent specialty beers that Hacker-Pschorr’s brewers craft in Munich.”

Hubertus Bock is member of the Maibock family — a style most famous in southern Germany that is brewed to celebrate the arrival of spring. Named for Saint Hubertus, the patron saint of hunters, Hubertus Bock is a golden-hued lager with a rich, robust malt profile that imparts a slightly sweet finish.

Sternweisse, which translates to “Wheat Star,” is an unfiltered, full-bodied, amber-hued wheat beer that, like all Hacker-Pschorr beers, adheres to the Reinheitsgebot (German Purity Law that specifies malt, water, and hops—and later yeast—as the only ingredients). Nevertheless, Sternweisse delivers subtle notes of caramel, almonds, marzipan and even a hint of coriander.

Festbier, a strong but highly quaffable lager, is a quintessential Bavarian celebration beer that is a perfect addition for Oktoberfest.

Finally, glowing a seductive shade of dark mahogany as it is poured into the glass, Animator is a sensational Doppelbock that heralds Bavaria’s fifth season of the year:Starkbierzeit, meaning strong beer season, is perfect for the holidays.

To celebrate the arrival of these limited-release beers, Hacker-Pschorr wants to send two lucky fans to Oktoberfest 2014 in Munich, Germany. To enter, just post a photo of yourself enjoying a Hubertus Bock on Hacker-Pschorr’s US Facebook page (facebook.com/hackerpschorrusa). Additional details will be announced closer to the release of Hubertus Bock.

About Hacker-Pschorr
Hacker-Pschorr is truly dedicated to the art of brewing. Since 1417, Hacker-Pschorr focuses on quality ingredients, artful crafting, and fresh flavors. Hacker-Pschorr beers have always been brewed in accordance with the Reinheitsgebot (purity law) of 1516, which mandates that beer brewed in Bavaria consist of only malted barley, water and hops. Other styles available from Hacker-Pschorr in the US are Weisse, Weisse Dark, Munich Gold, and Oktoberfest. Visithttp://paulanerhpusa.com/hacker-pschorr/ for details.
About Paulaner HP USA