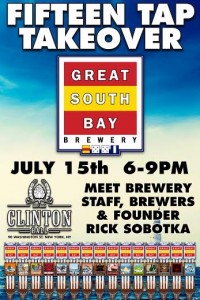 New York, NY —On July 15 from 6:00 — 9:00pm, Great South Bay Brewery is taking over the taps at Clinton Hall! Guests will have the opportunity to meet brewery staff, brewers and founder Rick Sobotka, who is a fourth-generation brewer and first-class beer connoisseur. Additionally, beer enthusiasts can taste 15 rare beers as well as several not available in New York City!

Below is what will be on draft:

Please make sure to click here to RSVP for this event. For additional information on Clinton Hall, call 212.363.6000 or visit http://clintonhallny.com/. **