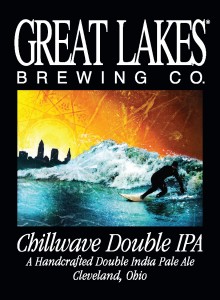 The new name is the result of an unforeseen trademark matter involving Craft Brew Alliance, Inc. (CBA) and Widmer Brothers Brewing which arose shortly after Alchemy Hour Double IPA’s strong market debut in February, 2013. “A lot of thought and preparation went into the name,” says GLBC Co-Owner Pat Conway. “We were disappointed that we had to change it, but both parties handled the situation amicably. The beer is still excellent, regardless of the name. We’re very proud to release it again as Chillwave Double IPA.”

Chillwave Double IPA will hit GLBC’s markets in March, 2014 on draft and in 4-Packs. The recipe, which features a blend of Mosaic hops, Nugget hops, and honey malt, remains unchanged. The label’s artwork pays tribute to the North Coast’s underground surf culture, and will return with slight modifications.

Great Lakes surfers work hard for their thrills. They wake before dawn, listening to the weather report like school kids hoping for a snow day. If the waves are worthy, they ride. No matter the cold, no matter the season, no matter the frozen crystals gathering in their beards, or the wind-whipping, white knuckle conditions they must face. Yeah, they’re all a little crazy. But we didn’t craft our Double IPA for the faint of heart. With a flash of Mosaic hops and a kiss of honey malt, it’s a rush in a bottle. Drink our Chillwave. Then go out and ride your own.

Great Lakes Brewing Company┬«, which is comprised of a Brewery and Brewpub, was founded in 1988 by brothers Patrick and Daniel Conway as the first microbrewery in the state of Ohio and today remains Ohio’s most celebrated and award-winning brewer of lagers and ales. For more information visit greatlakesbrewing.com.