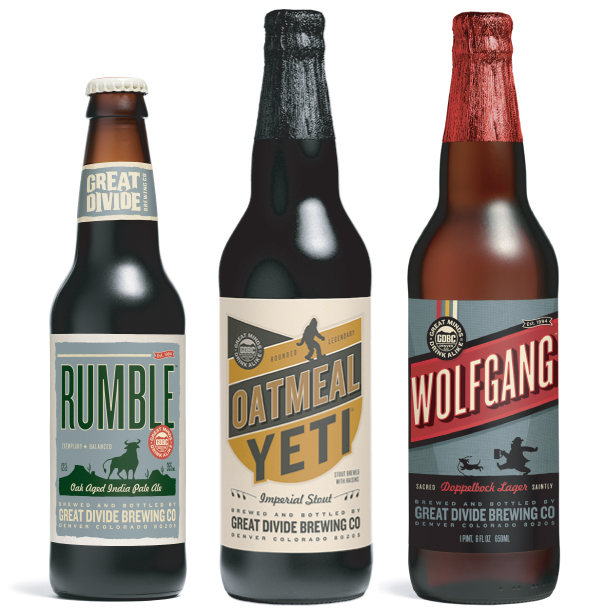 Great Divide Brewing Company announces the release of its highly-anticipated 2013 third quarter seasonals. This release includes the debut of a new member of Great Divide’s admired Yeti family, Oatmeal Yeti Imperial Stout, as well as the return of Rumble IPA and Wolfgang Doppelbock.

With the unveiling of Oatmeal Yeti Imperial Stout, Great Divide’s storied Yeti family gains an admirable new member. Much like its legendary predecessors, this Yeti is big, bold and dark. The addition of rolled oats softens Yeti’s notoriously roasty backbone, while a small amount of raisins added in the brew kettle creates a unique, complementary dark fruit character. Just as admired as those that came before it, Oatmeal yeti Imperial Stout is a gentle beast. At 9.5% ABV, it will be available in 22oz bottles and 5-gallon kegs.

Also returning for another summer on the shelves is Great Divide’s Wolfgang Doppelbock. Wolfgang’s heavenly notes of caramel, dark fruit and toffee are balanced by a subtle hop character. While the style’s revered history evokes an appreciation of austerity and sacrifice, this Doppelbock is a rich luxury — no repentance required. At 8% ABV, Wolfgang is available in 22oz bottles and 5-gallon kegs.

Additionally, all three of these seasonal beers will be available for purchase in their natural habitat — the Great Divide Brewing Company Tap Room — for on-site tasting and 64-ounce growlers to go. Also this summer, through September, the Tap Room has extended hours, opening at noon every day.

Great Divide brews some of the globe’s most balanced yet assertive and flavorful beers. These beers have landed an impressive amount of acclaim, earning 17 Great American Beer Festival medals and 5 World Beer Cup awards. Named “Top Brewer In Colorado” by Ratebeer.com (2013), 12th on their list of “Best Brewers In The World” (2013) and 7th onBeerAdvocate’s “All-Time Top Breweries On Planet Earth” (2010), Great Divide is one of America’s most decorated breweries. But why take their word for it? Crack open a bottle and decide for yourself.