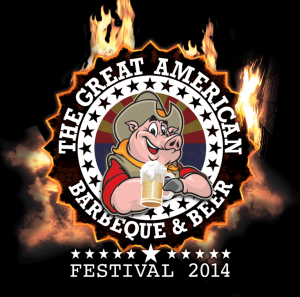 Chandler, Arizona—Smoked tri-tip, skirt steak, brisket, BBQ chicken, pulled pork sandwiches, ribs, brats, wings, grilled corn, BBQ nachos, BBQ burritos, and all the fixings — the Great American Barbeque & Beer Festival is nothing if not a day for feasting on Arizona’s best finger licking good BBQ. Of course, nothing goes better with this massive assortment of comfort food quite like 200 kegs of cold craft beer from SanTan Brewing Company, who will officially launch their 2014 summer seasonal, Mr. Pineapple Wheat Beer at the festival. In addition to craft beer, patrons will enjoy whiskey from Bulleit Bourbon and Dickel Bourbon to go with their Q.

Professionally produced by HDE Agency, the Great American Barbeque & Beer Festival will feature over 60 pit masters from across the nation serving up over 20,000 lbs of mouth-watering BBQ. For a truly adventurous experience, head over to the Raging Cajun Smoking BBQ station and try their bacon wrapped fried alligator — we’re told it tastes just like chicken! Or, try the mother klucker kabob, the bacon stuffed brisket or the loaded BBQ potato at the Montana Bar-BQ Company booth.

Don’t fill up just yet! The Great American Barbeque & Beer Festival will feature four eating contests including brats, wings, pie and ribs. All contests will take place in front of the main stage. Contestants must sign up at each sponsors booth at least 30 minutes or more prior to the contest. One winner in each category will win a $100 gift card.

General admission tickets are $10 and that includes entry into the event at noon. Food and beverages are sold separately. Children 12 years of age and younger are admitted for free. Presale tickets can be purchased online at www.chandlerBBQ.com.