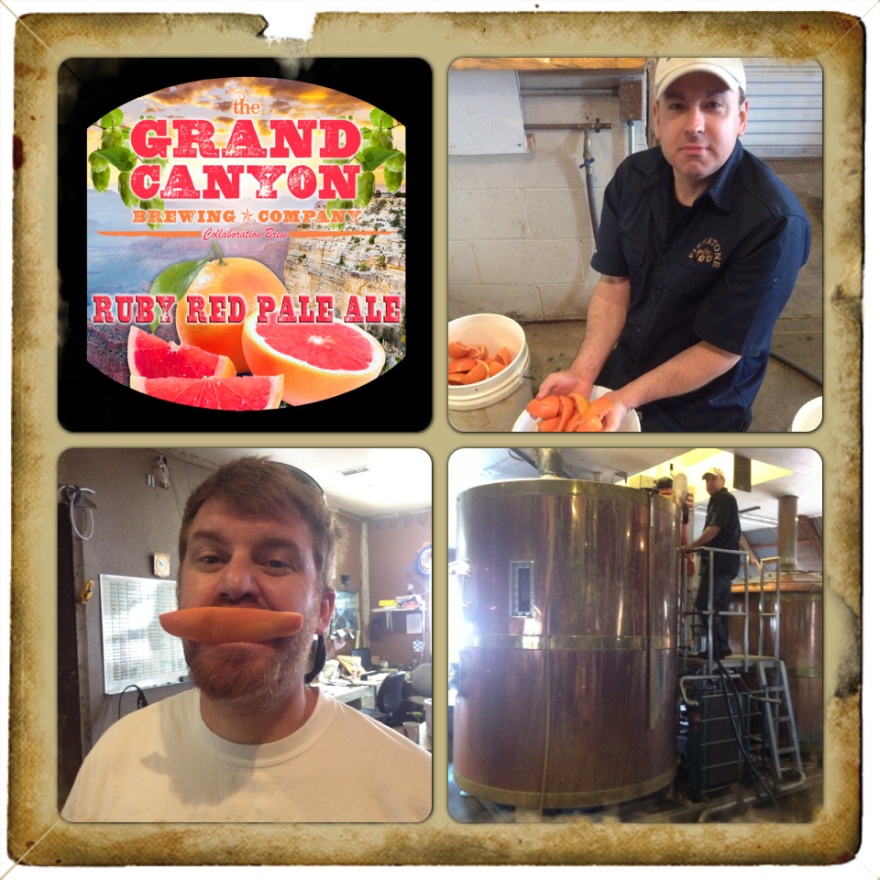 Continuing on their mission to support local beer and create new flavor profiles, the duo plus homebrewer friend and creative director of HDE Agency, Landon Evans headed up to Williams, AZ in early August to brew with the Grand Canyon Brewing Company.

In collaboration with Andrew Carricato, head brewer at the Grand Canyon Brewing Company, the team created Ruby Red Pale Ale, which will be ready for tapping on Septmeber 12th.

Puby Red Pale Ale was made with 21 lbs of ruby red grapefruit, 20 lbs of papaya and 5 lbs of lemon—the perfect end of summer session brew!

Ruby Red Pale Ale will make it’s debut at The Hungry Monk on September 12and will be the featured brew for a special “Beer & Bacon” menu, offering pairing suggestions and an abundance of well, bacon!

After the launch party at The Hungry Monk, Ruby Red Pale Ale will be available at select craft beer bars across Arizona including Cruisers 66 in Williams, World of Beer Tempe, Taste of Tops, Bourbon Jacks, Boulders on Broadway, Papago Brewing, Whole Foods Chandler and more, while supplies last. For updates on availability and other collaborations stay tuned to James Swann’s blog at www.kingjamesbrew.com.

The Grand Canyon Brewing Company is located in historic downtown Williams, AZ at 233 W. Route 66. This family owned and operated microbrewery produces a dozen different specialty craft brews each year. They recently began production on a new 22 oz Bomber bottle featuring their revolutionary new Flavor Bomb beer flavoring widget. For more information about the Grand Canyon Brewing Company, visit online at www.grandcanyonbrewery.com and be sure to “like” us in Facebook atwww.facebook.com/grandcanyonbrewery.

About the Hungry Monk

The Hungry Monk is a sports-themed, family friendly pub in Chandler offering an expansive range of craft beers with 28 varieties on tap, a menu packed with pub-style sandwiches, burgers, salads and the house specialty wings. The Hungry Monk has quickly grown a loyal following of food and sports fanatics with its food, drinks, charm and by broadcasting current sporting events on 18 HD flat panel televisions. The Hungry Monk is located at 1760 W. Chandler Blvd, Chandler, AZ 85224 and is open daily from 10:30 a.m.-1 a.m. Visit the Hungry Monk online at www.hungrymonkaz.com or like on Facebook at http://www.facebook.com/thehungrymonk.

HDE is an integrated multimedia marketing agency dedicated to expanding client visibility and establishing marketable brand positioning. We offer a wide range of brand development services including public relations, design, advertising, social media, print collateral and event production. By establishing a strong foundation of action based campaigns, HDE Agency strives to transform our clients’ goals and objectives into tangible efforts measurable by an increase of customers, sales and community relationships.