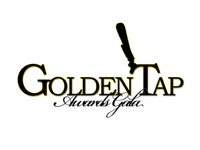 The Golden Tap Awards Gala, one of the premiere events of Long Island’s second annual Craft Beer Week, was be held last night at the Boulton Center for the Performing Arts in Bay Shore. Awards were given in a number of people’s choice categories, including Long Island Beer of the Year. Blue Point Brewing Company took top honors in several categories for the second year in a row. Also honored were Brooklyn Brewery President Steve Hindy and Brewers East End Revival (B.E.E.R.) founder Mike Deinhart.

For the second year in a row, Blue Point Brewing Company swept the beer and brewery categories. Over 1,000 Long Island beer enthusiasts participated in the online public poll voting in five of the eight award categories presented at the Gala on May 15, 2012. The winners are:

Three additional awards were given during the evening’s festivities. The results of an industry-only vote named Sean Nolan of the Great South Bay Brewery in Bay Shore as BEST LONG ISLAND BREWERY SALES REP. Steve Hindy, Co-Founder and President of Brooklyn Brewery was presented with the LIFETIME ACHIEVEMENT award and Mike Deinhardt was recognized with the 2012 BEER PIONEER award.

David Katleski, President of the New York State Brewers Association and a presenter at the gala, gave an encouraging speech about the growth of craft beer in New York State and praised the Long Island breweries specifically for making incredible beer. Both Katleski and Hindy touched upon the impact of the recent decision handed down in April by the State Supreme Court striking down a tax exemption for small New York breweries. Both seemed optimistic that with the help of key legislators a favorable resolution could be met.

The master of ceremonies for the evening’s festivities was Long Island funny man and homebrewer, Mr. Tim Saliani. The event was sponsored by Long Island Beer and Malt Enthusiasts (L.I.B.M.E.) and produced by Starfish Junction Productions.