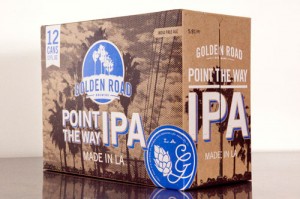 Los Angeles, CA — As the final step in their distribution throughout Southern California, Golden Road Brewing has partnered with L. Knife & Son to round out placements in South County San Diego. L. Knife & Son is known for their commitment to maintaining the finest selection of craft and specialty beers available, and once Golden Road was prepared to continue their distribution through San Diego, their partnership was a natural fit.

Launched in late 2011, Golden Road Brewing has maintained a solid focus on distribution within a close range of their Atwater Brewery, and the added placements throughout South County San Diego will complete their presence in Southern California. Says President Meg Gill, “Our entry into North County was really well received, and we’re now at the point where we feel ready to complete our San Diego distribution. Overall, we’re psyched to get our new beers into South County – our new brewmaster, Jesse Houck, has created a really diverse portfolio of new hoppy beers that we’re excited to share with San Diego. That area really felt like the missing piece of the puzzle, and we’re glad to finally get it going.”

To celebrate, President Meg Gill and Brewmaster Jesse Houck will be at Hamilton’s Tavern (1521 30th St) on Tuesday, April 23rd from 4-7PM tapping seven different Golden Road brews, including Wolf Among Weeds IPA, Golden Road Berliner Weisse and a special cask of Get Up Offa That Brown brewed with coffee. Golden Road Brews will be available at select Ralph’s, Vons, Bristol Farms, Whole Foods Markets, Trader Joe’s and BevMo locations throughout South County, as well as a variety of draft placements.