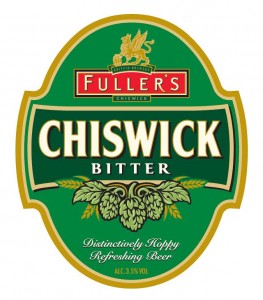 Fuller’s, London’s premiere brewery and maker of London Pride and ESB, is re-releasing its award winning session ale, Chiswick Bitter, on draught in limited quantities in the United States.

Chiswick Bitter derives its name from the London neighborhood of Chiswick, where the Fuller’s brewery has been situated on the River Thames since 1845. A fresh hop nose leads you into your first sip, where you’ll encounter the biscuity flavor of pale and Crystal malts up front, followed again by the true star of this beer: hops, which assert themselves in the pleasantly bitter, floral, and spicy finish.

Chiswick Bitter is the winner of the esteemed CAMRA (Campaign for Real Ales) Beer of the Year Award.

“Session beers have become a hot button in the United States in recent years, and a number of US breweries have begun experimenting with how to create a full flavored beer with low alcohol content,” says Fuller’s US Brand Manager, Charles Stanley. “Fuller’s has been brewing and refining Chiswick Bitter for decades, so this release is a great opportunity for American bars and restaurants to provide their patrons with session beer at its finest.”

Only 450 kegs of Chiswick Bitter are available throughout the entire United States. Bar and restaurant proprietors should contact their local Fuller’s distributor or email cstanley@paulanerhpusa.com to place their orders.

Fuller’s has been brewing Britain’s finest ales on the banks of the River Thames since 1845. Made with the finest malt and hops, a proprietary yeast strain, and over 150 years of experience, Fuller’s lineup of year-around and specialty beers has won more CAMRA (Campaign for Real Ales) awards than any other brewer in the world. For more information about Fuller’s, visit http://www.fullers.co.uk/.

Paulaner HP USA, purveyor of the world’s finest beers, is headquartered in Littleton, Colo., and imports Paulaner, Hacker-Pschorr, Fuller’s, O’Hara’s, and Fruli Fruli, This list of fine imports is available throughout the United States at upscale, on-premise and off-premise establishments. For more information about Paulaner HP USA visit http://www.paulanerhpusa.com.