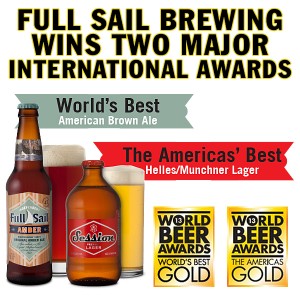 Hood River, Oregon — Throughout the past few months the World Beer Award judges throughout Asia, Europe and the Americas have been diligently running blind tastings to select the very best beers within eight internationally recognized beer styles. These awards acknowledge the best in each region and then in the world. The results were then announced in Norfolk, England in mid-November.

“As a craft brewer that has been brewing since 1987 we are honored to achieve this level of success within an international platform. We have a great deal of respect for breweries that have been in business for centuries and of the richness of the worldwide beer heritage they represent. Throughout our 26 years we have seen an incredible growth in the number of breweries, and for us to continue to win these caliber of awards and international recognition is a testament to our ongoing commitment and passion to brewing world class beers,” said Jamie Emmerson, Full Sail’s Executive Brewmaster. “Over the years, our passion and commitment to hands-on quality brewing has earned us a long list of over 300 awards and accolades, including 120 gold medals. Thanks to all our beer fans and friends for your ongoing support,” added Emmerson.

About Full Sail Brewing Company:
The independent and employee-owned Full Sail Brewery is perched on a bluff in Hood River, Oregon, overlooking the most epic wind and kite surfing spot in the world. At this very moment our specialists in the liquid refreshment arts are crafting barley and hops into your next beer. Among the company’s most popular brews are Full Sail Amber, IPA, Limited Lager Series, Pub Ale Series, Session Premium, Session Black, and Session Fest lagers. Founded in 1987, the Full Sail crew has been fermenting award winning godlike nectar for 26 years, and is committed to brewing great beer sustainably. The Full Sail Brew Pub is open seven days a week. Swing by for a pint, grab a bite, tour the brewery, or just soak up the view.