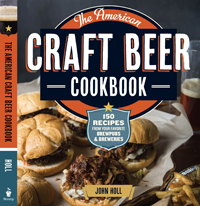 HOOD RIVER, Ore. — Full Sail Brewing is excited to host a book signing of The American Craft Beer Cookbook at their pub with author,John Holl. Join Full Sail Brewing on Wednesday, September 18th from 5-7pm to meet the author of this newly released book. Local bookseller Waucoma Books will be on site with books for sale for $19.95.

The book features Full Sail’s own Gouda Fondue made with Session Lager. Full Sail Brewing will be offering free samples of the Gouda Fondue along with an appetizer special. Patrons will receive a free pint glass and bottle opener with the purchase of The American Craft Beer Cookbook.

Gone are the days of TV dinners and bland light lagers. Not only are Americans now taking pride in cooking foods with fresh, local ingredients, but we’re also living in a frothy golden age of American beer, with more than 2,500 breweries in the United States producing upwards of 100 style variations of craft beer. And just as they’ve revolutionized our beer culture, so are craft breweries and brewpubs across the nation elevating the food we eat with a good cold draft. It’s no longer only about chips or burgers or wings (though they do taste great with beer!) — Chefs are now taking meals to a whole new level using the complex and intricate flavors imparted by different varieties of malts, hops, and yeasts to realize the full taste potential of dishes ranging from salads to choice cuts of meat and fresh seafood.

In his new book, The American Craft Beer Cookbook, beer journalist John Holl — who firmly believes that beer pairs better than wine with a fine meal — has traveled the country and collected more than 150 recipes from breweries, brewpubs, chefs, and beer-centric restaurants that illustrate the delicious intersection on the culinary road where food and beer meet. In some cases beer is used as an ingredient, and every recipe discusses how to find that perfect pint to bring the meal to a crescendo where the complexity, depth, and breadth of a craft beer beautifully complements, contrasts with, or enhances the flavors on the plate.

The independent and employee-owned Full Sail Brewery is perched on a bluff in Hood River, Oregon, overlooking the most epic wind and kite surfing spot in the world. At this very moment our specialists in the liquid refreshment arts are crafting barley and hops into your next beer. Among the company’s most popular brews are Full Sail Amber, IPA, Limited Lager Series, Pub Ale Series, Session Premium, Session Black, and Session Fest lager. Founded in 1987, the Full Sail crew has been fermenting godlike nectar for 26 years. Committed to brewing great beer and sustainable practices their award winning brews are now available in 30 states. The Full Sail Tasting Room and Pub is open seven days a week. Swing by for a pint, grab a bite,tour the brewery, or just soak up the view. http://www.fullsailbrewing.com

John Holl has visited more than 900 breweries around the world, conducting research for his beer-and-travel books as well as articles for the New York Times, Wall Street Journal, Beer Connoisseur, Beverage World, and many other publications. He has judged beer competitions, regularly lectures on craft beer, and appears often on NBC’s Weekend Today in New York. He is the editor of All About Beer magazine and is the host of the Beer Briefing on iHeartRadio. He lives in New Jersey.