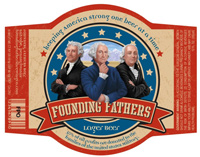 MINNEAPOLIS, MN – Founding Fathers Beer, a new American lager that is both owned and brewed in the United States, and will donate half of its profits to the families of military troops, hits the shelves this week in Minnesota and North Dakota.

Founding Fathers Products, a company dedicated to producing products that represent the ideals embraced by early America, is launching Founding Fathers Beer, the only American-owned lager that will rival the Budweisers of the world AND donate half of its profits to military troops and their families. Founding Fathers Beer will quickly expand distribution to include more than a dozen states in early 2012.

“The largest breweries in America are now foreign-owned and Founding Fathers is not only owned and brewed in America — half of our profits will go to those serving in our armed forces and their families,” said Phil Knutsen, founder and CEO. “We are thrilled to be introducing a new beer choice to Americans that will both taste great and compete with the major national brands.”

Founding Fathers saw an opportunity to produce a quality American-made beer at a value-driven price point and partnered with City Brewing Company of La Crosse, Wis., which has breweries in La Crosse, Latrobe, Pa., and Memphis, Tenn. The initial product launch will include 7,500 cases of Founding Fathers Lager that will be distributed in Minnesota and North Dakota this month.

Founding Fathers will partner with local military organizations in each state as it expands distribution across the country. In Minnesota, profits from Founding Fathers Beer will be administered through non-profit organizations Tee it up for the Troops and the Minnesota Military Family Foundation. Nationally, beer profits will be donated to the Armed Forces Relief Trust.

States rolling out the beer in early 2012 include Florida, Georgia, Iowa, Maryland, Missouri, Tennessee and Wisconsin.

Founding Fathers was established in 2009 by Knutsen and a team of investors who believe retail shelves need more American-made products that serve an important cause.

“The sky’s the limit with what we can develop in the future,” Knutsen said. “We are starting with beer but we’re very excited about expanding our business model to include additional products and we’re passionate about raising additional funds for our troops.”

Established in 2009 by Minnesota entrepreneur Phil Knutsen, the mission of Founding Fathers is to keep America strong one product at a time by providing the best American-made products aligned with the principles and values that made the United States the greatest country in the world. Founding Fathers Products will donate 50 percent of profits from the sale of its goods to support military troops and their families. For more information, visit www.foundingfathersproducts.com.