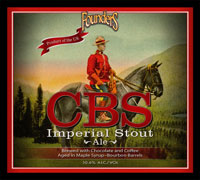 GRAND RAPIDS, MI – Founders Brewing Co. Vice President/Director of Marketing Dave Engbers announced today that the highly anticipated Canadian Breakfast Stout (CBS) will be the second release in the company’s 750mL “Backstage Series”. It will be released to the market on October 3, 2011, with a taproom release party on October 1.

There has been a great deal of anticipation and speculation regarding the upcoming release after the success of Blushing Monk, the series’ debut, earlier this year. Canadian Breakfast Stout is the epitome of why Founders launched the Backstage Series: it brings some of the brewery’s most sought-after beers, which have been available primarily at the taproom or at a few select events, to a much larger audience.

Canadian Breakfast Stout is an Imperial Stout brewed with a blend of coffees and imported chocolates, then aged in spent bourbon barrels that have most recently been aging pure Michigan maple syrup. The final product has had stellar reviews and is currently the fifth highest rated beer in the world on www.BeerAdvocate.com.

“Releasing small specialty batches is a great way for us to connect to our core beer enthusiast,” Engbers explains. “Fundamentally, we are a small brewery, and we love to do things our own way. This isn’t about flooding the shelves with a beer that we hope people will try; it’s about producing the best damn beer we can brew and offering it to those enthusiasts who have supported our passion for great beer.”

The company is not revealing any additional releases in the series, but Engbers says they will consist of many of the “popular one-offs” that have been offered in the taproom over the years and have become favorites among patrons and brewery staff. “I think part of what people love about Founders, besides our beer, is that we listen to what they are saying,” says President Mike Stevens. “With our new line, now we can offer them more of what they’ve been asking for.”

The company expects to release one more product in the 2011 Backstage Series later this year.