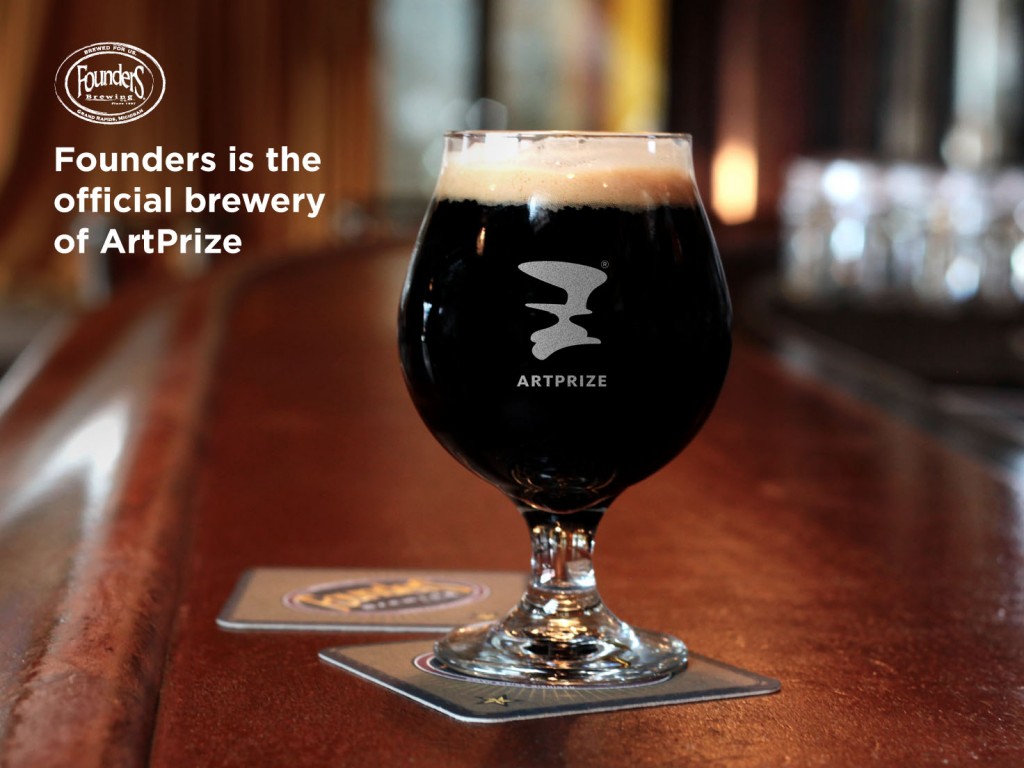 GRAND RAPIDS, Mich. — ArtPrize, the radically open, international art competition, today announced Founders Brewing Co. has signed on as a premier leadership sponsor and will be the official brewery of ArtPrize for the next five years. The agreement will allow both brands to capitalize on their respective platforms and nationwide growth.

“We approached ArtPrize because we love this community and we love what the event has done for this city,” said Mike Stevens, co-founder and CEO of Founders Brewing Co. “Our taproom has been a venue since year one, so we anticipate ArtPrize, just like everyone else. We chose to increase our commitment this year and can’t wait to pair our world-class beer with the most engaging art event in the world.”

Elements of the partnership include offering Founders beer at all official ArtPrize events, signage, promotion, merchandise, specialized glassware and other specialized items during the 19-day event. Additionally, the brewery will be recognized as a major sponsor at all ArtPrize events, and will be featured on the ArtPrize promotional poster.

“ArtPrize is always open to new, strategic ways to partner with leading and emerging national brands. We couldn’t be more excited to welcome them as the exclusive brewery of ArtPrize,” said Daryn Kuipers, interim executive director for ArtPrize. “Both Founders and ArtPrize are two organizations that are defining Grand Rapids’ reemergence. Both organizations have heritage, values and roots in this community and will make an excellent partnership.”

With its mix of public voting and juried awards, ArtPrize explores the tension between the professional and populist in an epic conversation. The fifth edition of the popular art competition will take place Sept. 18 — Oct. 6, 2013. Artist Registration for the 2013 event will open on Monday, April 22.

Established in 1997 by two craft beer enthusiasts with day jobs and a dream, Founders Brewing Co. has made a distinctive mark on the craft beer community by brewing complex, in-your-face ales, with huge aromatics and tons of flavour. Founders is one of the fastest-growing craft breweries in the United States, currently ranking among the top 30 largest craft breweries in the nation.

Founders has received numerous awards from the World Beer Cup and the Great American Beer Festival, and its beers are often rated among the best in the world by RateBeer and BeerAdvocate users. Located in downtown Grand Rapids, Mich., Founders is a proud member of the Michigan Brewers Guild and the Brewers Association.

ArtPrize is an international art competition, open to any artist and decided by public vote. It invites artists to try out new ideas on a large and diverse population of people. It seeks to broaden the critical dialog around contemporary art by awarding the world’s largest art prize, at $560,000. Registered artists and venues match themselves at artprize.org, and the public votes for the winners using mobile devices and the Web. ArtPrize 2012 included 1,517 entries from 46 countries and 41 U.S. states and territories, as well as 400,000 active participants. Since its inception, individuals of all backgrounds have cast more than 1.7 million votes for public art.