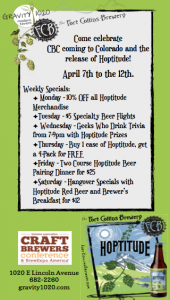 Fort Collins, Colo. — The Fort Collins Brewery, along with Gravity 1020 Modern Tavern is excited to celebrate the release of their seasonal brew, Hoptitude in conjunction with the Craft Brewers Conference.

“We couldn’t think of a better time or way to release Hoptitude, a craft brew, than in association with the Craft Brewer’s Conference and a week-long bash,” said Kaylee Kulich, FCB’s Marketing and PR Coordinator.

To compliment the CBC taking place in Denver, FCB will host specials all week long, including opening their tasting room throughout the week. From $5 specialty beer flights to a Hoptitude Beer Pairing Dinner and a Saturday hangover special FCB plans to celebrate CBC Hoptitude style.