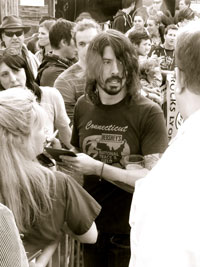 LYONS, CO. — The rock band Foo Fighters performed a private concert Monday (April 25th) afternoon in the 65 year old barn that is the original canning facility at Oskar Blues Grill & Brew. The barn is the birthplace of the craft-beer-in-a-can craze that Oskar Blues ignited when they put their hoppy flagship Dale’s Pale Ale in a can in 2002.

The town of Lyons, CO (population of 1,900), known for its deep roots in Bluegrass music and Oskar Blues’ legendary Tuesday night bluegrass pick (http://www.dailycamera.com/music/ci_17510903), was plugged in with a smoking set from the Rock n Roll veterans. The intimate show was a stark contrast from the 2008 Foo Fighters two-night stand at London’s Wembley Stadium attended by 165,000 fans, setting the venue’s two-night attendance record.

Ken Feldman & Gayle Gordon, A Pinewood Springs couple, won a contest from Blackberry (https://www.foofightersgaragetour.com/gallery) for a private concert with the Grammy-award-winning band, which performed a 45-minute set starting at 4:30 p.m. Feldman said band members remarked that playing to such a small audience in an intimate venue was more fun than playing in front of arena crowds. “They seemed to be just as excited as we were,” he said. According to Oskar Blues talent buyer and sound engineer, Dave McIntyre, no one other than the winners and 48 of their friends were allowed at the concert. A growing number interested locals assembled outside the barn as the sounds were heard throughout town. The monumental event put a time stamp on the 14 year anniversary of Oskar Blues Grill & Brew that opened on April 25th, 1997 and Rolling Stone Magazine called: “the place to be on a Saturday night in Colorado”.

Dave Grohl, the band’s lead singer (former drummer for Nirvana and Them Crooked Vultures) along with the rest of the band, enjoyed a sampling of the Oskar Blues Brewery’s line-up of boundary-busting canned beers with fans after the show.