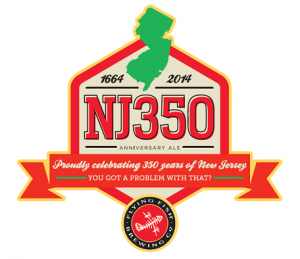 SOMERDALE, NJ — To honor the upcoming 350th Anniversary of the state of New Jersey, Flying Fish Brewing Company (900 Kennedy Boulevard, 856-504-3442), the largest brewery built in the state since prohibition, will brew a commemorative beer named NJ350 Anniversary Ale. Beginning in early 2014, NJ350 will be available in 750ml bottles and on draft at bars, restaurants and retail stores throughout the state of New Jersey, and regionally in Delaware and Pennsylvania.

“We’re Jersey proud and very excited to be part of the official NJ350 celebration. For this momentous brew, we’d like input from Jersey beer lovers to suggest ideas for the recipe,” says founder Gene Muller, who has been crafting beer in the state since 1995.

Over the next few months, leading up to the NJ350 brew in February 2014, Flying Fish would like to invite New Jersey beer lovers to help them determine NJ350’s style and ingredients by posting suggestions to Flying Fish’s Facebook page: Jersey Fresh Ale.

NJ350 will join Flying Fish’s other Garden State tribute beers, including Forever Unloved (F.U.) Sandy and the popular Exit Series. F.U. Sandy, a hybrid wheat-pale ale, raised more than $70,000 for the victims of the storm-ravaged Jersey shore after Hurricane Sandy, and the on-going Exit Series highlights a distinctive aspect of each exit on the New Jersey Turnpike through the ingredients in the brew.

Flying Fish produces a range of beers year-round, along with a variety of seasonal specialties. The brewery recently moved into a new facility in Somerdale, which will ultimately allow them to quadruple production. The facility boasts a wealth of sustainability features, enabling the very eco-conscious business to brew their award-winning beer in the most environmentally friendly way possible. A new tasting room just opened to the public, and tours are offered Tuesday through Saturday every week.

For more information about Flying Fish, please visit them online at www.flyingfish.com or call (856) 504-3442. Beer lovers can also follow Flying Fish on social media: via Facebook and Twitter.

New Jersey is turning 350 in 2014. The state’s rich heritage, unique resources and resilient, determined people are what make it a place many are proud to call home. Since its founding in 1664, New Jersey has played a pivotal role in the shaping of American life and culture. Today, New Jersey is home to 21 Fortune 500 companies and more than 1,100 multinational companies from 40 nations. When it comes to art, culture, music and sports, New Jersey houses hundreds of museums and is the home state to countless film, TV, and music legends; notable literary figures; and acclaimed athletes. This once-in-a-generation, year-long event commemorates the Garden State’s notable contributions to the nation and the world. For more information, please visit www.officialnj350.com.