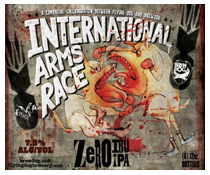 LONDON — In a final more tense than the women’s fencing individual sabre face off for Gold between Korea’s Kim Ji Yeon and Russia’s Sophia Velikaia in this year’s London Olympics, Flying Dog Brewery emerged as victors over BrewDog in the UK International Arms Race.

International Arms Race — a Zero IBU IPA — was put to the test on a five-day tour of BrewDog pubs in Scotland (Aberdeen and Glasgow) and England (Newcastle, Manchester, and Camden).

Also put to the test? Our Brewmaster Matt Brophy and VP of Marketing Ben Savage’s livers, ability to cope with men in skirts, inability to use their personal hairdryers, and forced adaptability to the fact that everything is on the wrong side.

In this epic combative collaboration, hops were banned from the battlefield. Instead varying amounts of spearmint, bay leaves, rosemary, juniper berries, and elderflower were used to impart bitterness. It was also decided that each brewer would brew their own version of the beer to highlight the individual brewer’s craftÔÇªand avoid as little skin-to-skin contact with other people as possible.

At each event, customers were encouraged to purchase a flight of both Zero IBU IPAs and blindly vote on their favorite. Savage also distributed Flying Dog-branded sunglasses to the crowd, a generous and fitting gift for the three sunny days the UK has each year.

Then, at the end of each night, votes for each version of the beer were tallied. BrewDog won in Aberdeen and Glasgow — obviously a conspiracy by the ghost of William Wallace. But Englanders clearly had better taste, opting for the Flying Dog beer in both Newcastle and Manchester.

Going into the final event in Camden, the stakes were high and tied. Many beers were drunk and until the votes were counted, no one could tell who would reign supreme. But then, the unborn child of Prince William and Princess Kristal announced that Flying Dog was the winner of the International Arms Race in the United Kingdom.

The room fell silent as Brophy (draped in a banner of spangled stars) climbed onto the bar (an eloquent move he perfected as a young man in New Jersey) to address the crowd:

there is pains to bring it to life.’” [Insert dramatic pause.] “Wait, no it wasn’t. Silly me. It was George Washington that said that.”

From there, Brophy gave a well-deserved thanks to the fine ladies and gents of BrewDog, who “truly did a bloody smashing job of hosting us damn Yankees, setting us up with a guide who has neither a driver’s license nor the ability to drive, and breaking down the nuances of the British dental care system.”

And now? It’s not called International Arms Race for nothing. Brophy, along with Vice President Joe Biden, will return the favor and host BrewDog leader James Watt on a U.S. tour in late September.

As for Savage? He is not allowed to leave the country. Although their Audi rental was “backassward,” his driving habits live up to his name. He is awaiting sentencing from the Queen Mother herself on the 102 speeding tickets he obtained during the five-day trip, during which “they made great time.”