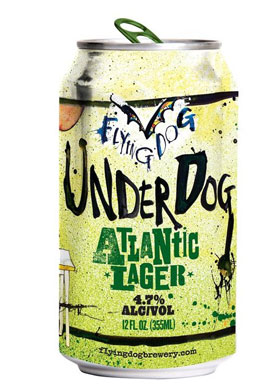 Frederick, MD — The Baltimore Orioles and Washington Nationals are taking their local brewery out to the ballgame. Beer from Flying Dog Brewery will be available at both ballparks all season long.

In Oriole Park at Camden Yards, a variety of styles will be sold at over 20 locations, including the Flying Dog storefront and The Roof Deck, which opened last season. At Nationals Park, Flying Dog’s Belgian-Style IPA, UnderDog Atlantic Lager, and Snake Dog IPA will be sold in the general concession areas, the Red Loft Bar, and the Red Porch Bar.

Flying Dog and the Orioles are also continuing the popular Firkin Friday program, where cask-conditioned beer is sold at both the Flying Dog storefront (lower level, between sections 23 and 29) and The Roof Deck at every Friday home game.

“Last year, Oriole Park was the first ballpark in the country to feature cask-conditioned beer,” Savage said. “The organization’s willingness to forge a new path for craft beer and sports partnerships is truly remarkable.”

The full Firkin Friday schedule at Oriole Park is as follows:

Located in Frederick, MD, Flying Dog is Maryland’s largest brewery. As its tagline proclaims, Flying Dog is committed to producing world-class craft beer and continues to push the envelope with experimental and limited-edition releases. For more information, please visit www.flyingdogbrewery.com.