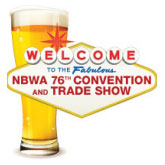 For the second year in a row, NBWA members will hear from the U.S. leaders of five breweries and importers who will appear together, all on one stage, during the General Session on Tuesday morning, October 1. Participants include:

These leaders will share their views on issues facing the beer industry and discuss the strengths of the American beer distribution system. They also will answer some of the NBWA membership’s most burning questions.

“We are excited to once again have this distinguished group on one stage for candid conversation and a discussion of this great system, which works so well for so many,” said NBWA President & CEO Craig Purser.

Registration is available online at www.nbwa.org. Hotel accommodations at Caesars Palace can be made online, or by calling 1-866-227-5944. The negotiated room rates for NBWA Convention & Trade Show attendees are: $199 plus tax per night for the Forum Tower or $203 plus tax per night for the Palace, Octavius and Augustus Towers. The meeting space is located in the Palace Tower. The room block cut-off date is Thursday, September 5, 2013. The NBWA guest room block can sell out prior to that date. Once the block is sold, rooms and rates cannot be guaranteed.

The National Beer Wholesalers Association (NBWA) represents the interests of America’s 3,300 licensed, independent beer distributor operations in every state, congressional district and media market across the country. Beer distributors are committed to ensuring alcohol is provided safely and responsibly to consumers of legal drinking age through the three-tier, state-based system of alcohol regulation and distribution. To learn more about America’s beer distributors, visit www.AmericasBeerDistributors.com. For additional updates from NBWA, follow @NBWABeer on Twitter.