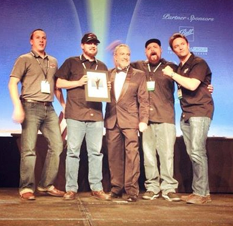 Buellton, California — It has been a good week for Figueroa Mountain Brewing Company. The three-year-old brewery brought home two medals from the 2014 World Beer Cup and 5 from the 2014 New York International Beer Competition.

“We are so proud of our production team,” exclaims the over-joyed Dietenhofer. “Bringing home multiple medals among thousands of entries from established breweries is further acknowledgement of all of their hard work and talent.” Dietenhofer is referring to the near-5,000 beer entries in the World Beer Cup from 62 different countries. Figueroa Mountain Brewing Co. and Firestone Brewery were the only two breweries from California’s Central Coast to bring home medals.

For more information about the winning beers or about Figueroa Mountain Brewing Company, please visit www.FigMtnBrew.com.

Figueroa Mountain Brewing Co. was founded by father and son team, Jim and Jaime Dietenhofer, in 2010. With a passion for craft beer, they set out to pay homage to the beautiful Santa Ynez Valley with handcrafted beer and hand-drawn artwork depicting the local landscape on their labels. They brought on Brewmaster AJ Stoll who now oversees a team of brewers in their Buellton, California brewery. With three locations in Santa Barbara County, Figueroa Mountain Brewing Co. beer can be found in their taprooms or at select retailers and restaurants throughout California. Learn more about #FigMtnBrew or where to find their beer at www.FigMtnBrew.com.