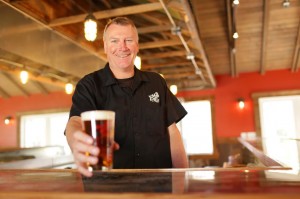 Buellton, California— Only a few months after celebrating their 3rd Anniversary, Figueroa Mountain Brewing Co. will be celebrating another milestone. The rapidly growing brewery will open its third location in Los Olivos, California. Slated to open on Friday, March 7, 2014, Figueroa Mountain Brewing Co. at “the Cottage” will feature a smaller version of their Buellton and Santa Barbara Taprooms.

“We are thrilled to bring our beer to Los Olivos,” exclaims Fig Mtn Brew President, Jaime Dietenhofer. “The tasting room at ‘The Cottage’ will be a great place for locals and visitors to enjoy craft beer made right here in the Santa Ynez Valley”.

Meanwhile, Fig Mtn Brew’s Buellton Taproom will be expanding with a new second level including a mezzanine overlooking the brewing facilities. Soon customers can enjoy a pint while watching a brew in progress. The second level, set to open in March, will boast a brand new bar and extra seating allowing for the upstairs to be closed for private events or special Taproom dinners and tastings.

Taproom manager, David Esdaile, talks about the new changes: “The recent growth throughout the company is certainly a testament to the fine work done by the brewers.” The new expansions also allow more dedicated Fig Mtn Brew fans to join the sold out Mug Club. A limited number of Mug Club spots are open in both the Buellton and Los Olivos Taprooms. Mug Club members can celebrate their new discounts and access to club events with a “Meet Your Mug” event on Friday, March 7 in Los Olivos and Thursday, March 13 in Buellton from 5:00pm to 7:00pm. The public is invited to attend the Los Olivos Grand Opening from 12:00pm to 6:00pm on March 8, 2014 featuring live music, BBQ for sale, special giveaways and a raffle at 2:00pm. The tasting room is open 11:00am to 9:00pm daily.

Another major milestone to look out for is the opening of Beto’s Place in the Buellton Taproom this spring. The brand new restaurant will feature casual California cuisine with an emphasis on fresh, local ingredients. Chef Beto Huizar offers a full menu featuring gourmet versions of pub favorites. Beto’s Place will serve lunch and dinner daily from 11:00am-9:00pm.