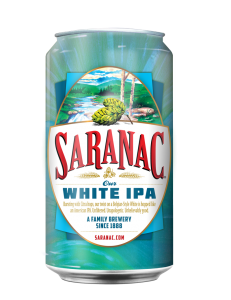 UTICA, N.Y. — Customers asked and F.X. Matt Brewing Company delivered — several Saranac favorites are now available in cans.
Saranac Pale Ale, White IPA, Blueberry Blonde, and Shandy are ready for your next adventure in travel-friendly cans.
Saranac, celebrating 125 years of brewing this year, boasts state-of-the-art canning operations on site. With flexibility for both 12- or 16-ounce can options, this innovative canning line ensures the same high-quality taste as a bottle.
“Our canning operations allow us to give our customers the same distinctive taste as the bottle alternative,” said company President Fred Matt. “The four most-exciting things about our cans are that they preserve the beer by protecting it from light; take less energy to produce, ship and recycle; have a taste-free liner; and keep more oxygen out with a tighter seal.”
“A lot of people claim they can taste the metal when beer is canned, “ Fred said. “But these four facts reinforce that our can packages are of the best quality, and the flavors are just as robust and drinkable as in our bottles or kegs.”
As a special thank you to customers, a bonus pint of canned Legacy IPA will also be available for a limited time in specially marked 125th Anniversary Celebration packages of Pale Ale, Trail Mix and White IPA.
About the Beers
Legacy IPA: Inspired by their founder’s original recipe for one of the first American IPAs, this beer features a blend of historic, traditional, and innovative hops for a heavenly aroma and full-bodied flavor. Pair it with curry, Thai, dry rubbed ribs, jerk chicken or pork, and Stilton, aged cheddar, and Gorgonzola cheeses. (60 IBUs and 6.5 percent ABV)
Pale Ale: A Saranac staple, this beer recently took gold in the pale ale category at the 2013 United States Open Beer Championship. This was the first competition Pale Ale was entered in after the brewery recently updated the brewing process for this classic favorite. Their new “Hop Infusion Process” maximizes beer to hop exposure for a fresher taste. This well-balanced beer has a crisp finish. Pair it with burgers, bread pudding, and cheddar cheese. (32 IBUs and 5.5 percent ABV)
White IPA: Orange peel and coriander pair with wheat malt and oats for a refreshing twist on the traditional IPA. Pair it with spicy foods, citrus salads, and bleu cheese. (50 IBUs and 6 percent ABV)
Blueberry Blonde Ale: More than a hint of blueberries, but just enough to leave you wanting more. Brewed to be light and refreshing, this is the perfect thirst quenching beer for warm weather days. Pair it with fresh seafood, salads, and Chevre cheese. (5 percent ABV)
Shandy: It doesn’t get more refreshing than real lemon juice, sugar and water to make actual lemonade. And when mixed with a light lager, it’s the best interpretation of this popular European tradition, hands down. Pair it with light summer foods, BBQ, key lime pie, and feta cheese. (4.2 percent ABV)
About F.X. Matt Brewing Company
F.X. Matt Brewing Company in Utica, N.Y., was founded in 1888. Today, under the leadership of the third and fourth generations of the Matt family, the brewery is celebrating 125 years of brewing. Through a commitment to innovation and brewing excellence, the company has earned a reputation as one of the country’s most respected brewers of craft beers, including the Saranac line. In each bottle of Saranac, you’ll find exceptional quality, distinctive ingredients and a refreshing twist on tradition — the signature of the F.X. Matt Brewing Company.