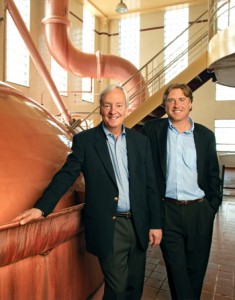 This year’s CBC, held March 26-29 in Washington, D.C., brought together nearly 6,000 brewing professionals for more than 80 seminars on topics including sustainability, sales, packaging and export development, along with daily receptions, brewery tours and hospitalities.

Nick’s program, Win-Win-Win: Franchise Law Reform to Benefit Craft Brewers, Wholesalers and Consumers, included a panel discussion focusing on franchise law reform and how it can benefit all stakeholders.

Fred, in coordination with representatives from the Brewers Association and National Beer Wholesalers Association, presented Craft Beer Distributor Criteria. This program provided information on how distributors can become craft beer-friendly.

Jim’s first seminar outlined the process and benefits of the anaerobic fluidized bed digester system recently installed at the F.X. Matt Brewing Company’s Utica brewery. This system removes 80 percent of the organics from the brewery’s wastewater and generates up to 40 percent of the facility’s electricity.

Jim’s second presentation explained how to use readily available programs, such as the web- and template-based tool developed by the Master Brewers Association of the Americas, to help craft brewers adopt a food safety protocol for their brewery.

Nick joined the brewery in 1989 after working for 15 years with Richardson-Vick’s, Inc. and Procter & Gamble. He has been an integral part in the effort to re-focus the brewery’s business, including the development of successful line extensions and seasonals in the Saranac family. Nick is a member of the board of the Brewers Association and currently serves as past chairman.

Fred has been with the brewery since 1989. As a key member of the management team, he has been successful in leading the brewery into new areas of growth and the development of the Saranac brands. Instrumental in expanding the distributor network, Fred has successfully rebuilt the sales and marketing organization in order to support the growth of the Saranac brand and other new products.

Jim began his brewing career with the G. Heileman Brewing Company in Frankenmuth, Michigan in 1984, and has been with F.X. Matt Brewing Company since 1991. He received his Juice HACCP Certification through Cornell University and currently heads the Master Brewers Association Sub-Committee on Food Safety in Breweries.