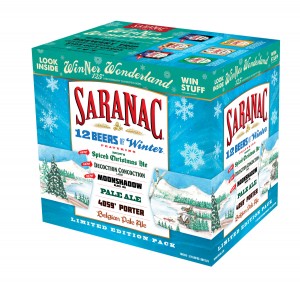 UTICA, N.Y. — Those long winter nights just got a bit more bearable with the announcement of Saranac’s winter brews.

Newbies — Rudy’s Spiced Christmas Ale, Decoction Concoction Lager, and Moonshadow Black IPA — join returning favorites — 4059’ Porter, Belgian Pale Ale, and 2013 United States Open Beer Championship gold medal winner Pale Ale — to make up the 12 Beers of Winter. In addition to being available in 12 Beers of Winter, Rudy’s Spiced Christmas Ale will be available in 6-packs, 12-packs and draught. Season’s Best and Caramel Porter will also be available, separately in 6-packs and draught.
But Saranac fans are excited about more than their winter seasonals. Consumers will also have 125 chances to win prizes and more with the “WinNer Wonderland” promotion, a play on the popular phrase “Winter Wonderland.”

“WinNers” will find sweet surprises in their 12 Beers of Winter package, including custom Saranac jackets, $125 gift cards, and other 125th anniversary commemorative swag.

“We’ve been focused on rewarding our consumers as we celebrate our 125th anniversary this year,” said company President Fred Matt. “We literally can’t stop giving things away. This promotion is another way we’re thanking our consumers for helping us make it to 125 years. All they have to do is look inside their winter 12-packs.”

Consumers will also have a chance to win by entering at Saranac.com when 12 Beers of Winter 12-packs hit the shelves.

F.X. Matt Brewing Company in Utica, N.Y., was founded in 1888. Today, under the leadership of the third and fourth generations of the Matt family, the brewery is celebrating 125 years of brewing. Through a commitment to innovation and brewing excellence, the company has earned a reputation as one of the country’s most respected brewers of craft beers, including the Saranac line. In each bottle of Saranac, you’ll find exceptional quality, distinctive ingredients and a refreshing twist on tradition — the signature of the F.X. Matt Brewing Company.