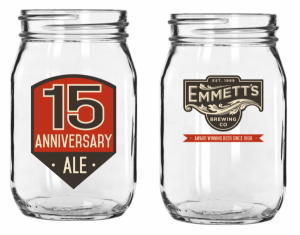 West Dundee, IL — Emmett’s Tavern & Brewing Company has been brewing award-winning craft beer since September 1999. To give back to our loyal patrons and the craft beer community for 15 years of endless support, we are brewing a 15th Anniversary “Midwestern Pale Ale” with malt, hops, and yeast from the Midwest region. The beer will only be available in our three brewpubs during the month of September, or while supplies last. Each customer will receive a commemorative Emmett’s 15th Anniversary glass with the purchase of our “Midwestern Pale Ale,” while supplies last.

With the help from our friends at Hop Head Farms, LLC in Hickory Corners, Michigan, Omega Yeast Labs in Chicago, Illinois, and Briess Malt in Chilton, Wisconsin, we are proud to brew an American-style Pale Ale, a classic style of beer that epitomizes what craft beer is all about. It is a beer style that has allowed us, and many other U.S. craft breweries, to be successful in this industry.

Established in 1999, Emmett’s Brewing Company is comprised of three brewpubs in the Chicago suburbs. Tradition, craftsmanship, and the highest standards in beer and food are our passion. We believe in using only the finest ingredients in what we make, whether they are destined for your pint glass or your plate. Our original pub is in West Dundee and houses our copper-clad, seven barrel JV Northwest system. There, we produce about 500 barrels per year, including all of the company’s barrel-aged and cask-conditioned ales. We opened Downers Grove in 2004 and brew on a 15 barrel Specific Mechanical system to make about 850 barrels per year. The 10 barrel DME system at Palatine is our newest brewery and is also the home of our bottle and draft packaging operations. Our beer can be found in chain and independent retail stores, bars, and restaurants throughout the Chicago-land area.