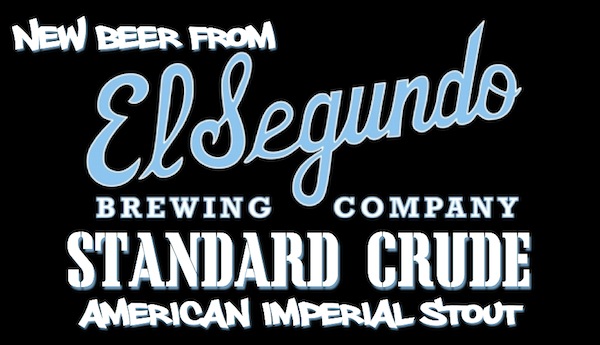 EL SEGUNDO, Calif. — El Segundo Brewing Company sent its ?rst production beers out to initial accounts in May 2011. In 2012 we brewed over 1,000 barrels (1 barrel = 31 gallons) and now have over 150 accounts between Santa Barbara and San Diego, and as far East as Redlands. We doubled our original 60 barrel fermentation capacity in June last year, and will be doubling up yet again in March.

We take the next big step, next week. We will be releasing our ?rst bottles ever, White Dog IPA and Standard Crude American Imperial Stout, in 22 oz. bottles at the brewery.

Friday February 1st, 5pm. The bottles will start selling. We will be tapping a cask of Rum-soaked and Oaked Hyperion’s Double Stout we have been sitting on for the occasion. We will have savory pies (meat and veggie) from El Segundo Catering.

We will be here, drinking and celebrating.

Join us! And buy some of our ?rst run of bottles!

White Dog IPA has been our best selling hoppy beer of the past year, and has garnered acclaim across Los Angeles. We use 50% wheat in the malt bill, and the Nelson Sauvin hop from New Zealand which give it a very unique character that our customers have come to love.

Standard Crude is an American Imperial Stout.. since, why should the Russians get all the recognition! All malted barley with just a sprinkling of oats for texture. This beer is roasty throughout with many deep undertones of blackberry, cassis, tobacco and leather. The layers of malt reveal themselves one by one as the beer changes in the glass. Take your time with this one. Enjoy now, or lay it down in your cellar for a few years! This is a once a year release, and the ?rst from our brewery.

El Segundo Brewing Company was created out of a love for beer. Well, hoppy beer at least. Rob Croxall, Proprieter and Brewer, was a longtime aerospace finance guy who left a cushy corporate job to risk it all on craft beer. He says all the time, “My worst day here, still beats my best day there.”

By our measureÔÇª THAT is success.

Rob enlisted Thomas Kelley, formerly the Certified Cicerone at the esteemed Library Alehouse, for a trained palette and an understanding of the quickly expanding LA craft beer scene. Together they hope to grow El Segundo into THE hop-centric brewery for South Bay, Los Angeles and beyond.