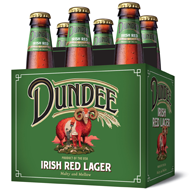 ROCHESTER, NY— Craft beer drinkers won’t need the luck of the Irish to enjoy Dundee Irish Red Lager — they just need to stock up by the end of March. Dundee Ales & Lagers has brought the popular Irish Red Lager back for another limited engagement that coincides with the largest annual celebration of Irish culture, St. Patrick’s Day. Available now in stores, the Irish Red Lager is sweet and malty with a slight dry finish and a sweetness that is well-balanced by the hops.

“Dundee Irish Red is a smooth drinking lager with a lot of character. It has full-bodied taste, but is easy to drink at 5.0 percent alcohol by volume (ABV) and 30 on the International Bittering Units (IBU) scale,” said Jim McDermott, lead Dundee Brewer. He also joked, “It’s specifically brewed to be the perfect accompaniment for corned beef and cabbage.”

The label of the Irish Red Lager features of one Dundee’s trademark, distinctive label characters—a sheep that is being painted red by an Irishman. For centuries, farmers have painted sheep in Ireland and Scotland to make them easier to find.

“We have a great line-up of beers — and a fun cast of characters to tell each brew’s story,” said Janine Schoos, brand manager, Dundee Ales & Lagers. “The characters represent our beers in a fun and approachable way. We hope to provide a “little entertainment” to our beer drinkers as they get together and enjoy Dundee.”

Dundee Ales & Lagers brews and releases four seasonal beers for a limited time throughout the year. The Irish Red Lager will be followed by the return of Summer Wheat this April. The seasonal specialties will be available on draft at bars and restaurants, and in six-packs at convenience and grocery stores across the United States.

In addition to the four annual seasonal beers, Dundee offers two Seasonal Variety Packs with four other different brews. The spring/summer variety pack contains three bottles each of a Pilsner, India Pale Ale, Pale Bock Lager and Stout. The spring / summer Seasonal Variety Pack will arrive in March and be available through the end of August in 12- and 24-pack bottles.

“Each of the beers in the Seasonal Variety Pack has a character that is as unique as the one on the bottle,” said Schoos. “The Dundee variety packs a great way for people exploring craft beers to get a wide sampling of excellent beer.”

Dundee Ales & Lagers is a family of craft beers which includes the year-round IPA and a full line of limited-edition seasonal releases. Be responsible.