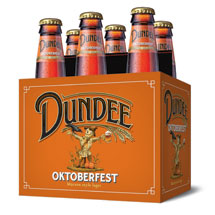 ROCHESTER, NY — It’s the time of year craft beer drinkers have been dreaming of — fall brew season! For many, that means German-themed parties full of lederhosen, bratwurst and beer. For Dundee Ales & Lagers it means the return of the perennial fall favorite Dundee Oktoberfest.

“Dundee Oktoberfest is the perfect choice for beer drinkers looking to transition from light summer ales to heartier winter brews,” said Jim McDermott, lead Dundee Brewer. “It’s a M├ñrzen-style lager with 5.5 percent ABV and rates 17 on the IBU scale. The brew is traditionally fragrant and full-bodied, mixed with a unique combination of specialty malts that give it that amber-color with a rich, sweet, malty finish.”

M├ñrzen lagers became a seasonal staple more than two hundred years ago in Munich, Germany. The March (M├ñrzen) brew was stored in caves through the spring and summer, and emerged just in time for Oktoberfest. That festival has now grown into a 16-day extravaganza hosting six million people. And despite the allure of sausages, pretzels and sauerkraut, most still come for the beer.

Oktoberfest’s popularity has resulted in countless German-themed festivals held around the world, including hundreds in the US. Today, Oktoberfest and M├ñrzen-style lagers are viewed as symbols of the harvest season, much like the scarecrow, which is featured on Dundee Oktoberfest bottles as one of Dundee’s trademark, distinctive label characters.

So what does the Scarecrow think of Dundee Oktoberfest? “Finally, a brew that’s worthy of all that lederhosen,” he answered.

Dundee Ales & Lagers brews and releases four seasonal beers for a limited time throughout the year. Oktoberfest will be followed by a new addition to the seasonal line-up this winter. The seasonal specialties will be available on draft at bars and restaurants, and in six-packs at convenience and grocery stores across the United States. Fans should start stocking up — the limited-release is only available through the end of October.

Dundee Ales & Lagers is a family of craft beers which includes the year-round IPA and a full line of limited-edition seasonal releases, as well as two variety packs released in the spring and fall.