Dundee English-Style Ale, reminiscent of a handmade tavern beer, combines pale and caramel malts with Columbus and Cascade hops for a malty, slightly sweet finish. Dundee Nut Brown Ale is brewed in the traditional Yorkshire square fermentation style, with caramel and chocolatemalts and Willamette hops, producing a round-bodied ale similar to those found in Northern England.

“Both English-Style Ale and Nut Brown Ale will remind craft beer drinkers of traditional tavern brews, and each has a unique flavor profile” said lead Dundee Brewer Jim McDermott. “English-Style Ale is 5.1 percent alcohol by volume (ABV) and rates 17 on the International Bittering Units (IBU) scale, making it easy to drink with a classic, clean taste. The Nut Brown Ale has a 5.3 percent ABV and rates a 20 on the IBU scale. Beer drinkers will enjoy its rich taste and hints of natural hazelnut flavor.” 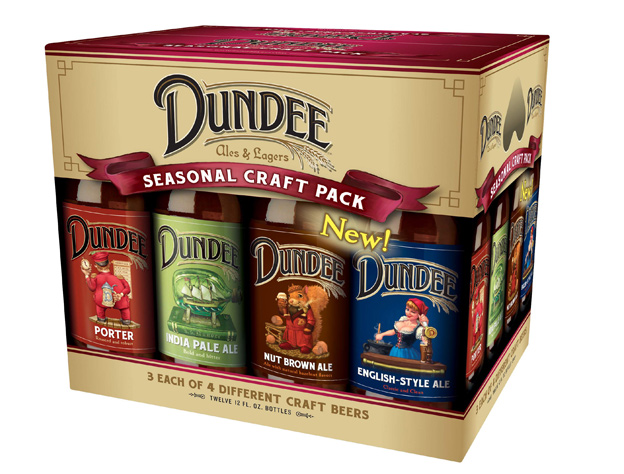 Making their debut with the new brews are two new Dundee label characters—a barmaid on the English-Style Ale and a sophisticated squirrel on the Nut Brown Ale. “Dundee approaches craft beer in a fun, drinkable and entertaining way, which is embodied by the characters on our beer labels,” said Lisa Texido, brand manager, Dundee Ales & Lagers. “Consumers will be able to recognize Dundee on-shelf by its eye-catching packaging which features two new characters this fall.”

Returning to the Dundee fall variety pack are the India Pale Ale and Porter. With the inclusion of the IPA and Porter, consumers will find a broad range of flavors and beer styles in the 12- or 24-bottle variety packs. In line with traditional IPA style, the Dundee IPA has a 6.3 percent ABV, rating 60 on the IBU scale. Porter is a robust brew with 6.5 percent ABV and a 30 IBU rating.

As the weather turns cooler, craft and mainstream beer drinkers look for more full-bodied flavors and brews, explained McDermott. “The four brews in the variety pack—English-Style Ale, Nut Brown Ale, IPA and Porter—are quality, approachable beers that will deliver traditional fall flavors and the variety that consumers look for in their craft beer choices.”

Also returning to the Dundee Ales & Lagers lineup is the perennial fall favorite Dundee Oktoberfest. The limited-release seasonal brew is the perfect choice for beer drinkers looking to transition from light summer ales to heartier winter brews. The brew is a 5.5 percent ABV lager and rates 17 on the IBU scale. Oktoberfest is available through the end of October, in 6- pack bottles and on draught in a variety of locations.

“Oktoberfest is our most popular seasonal and we’re excited to bring it back again this year. It’s a quality craft beer at an affordable price, perfect for fall entertaining and relaxing with friends,” said Texido. “It’s only available until the end of October—ensuring that every Oktoberfest served in bars or restaurants or purchased at retail is at the peak of freshness.”

With the introduction of English-Style Ale and Nut Brown Ale, the Dundee Ales & Lagers lineup iscomprised of 14 different brews, including the four seasonal brews, which rotate throughout the year. Following Oktoberfest, Dundee’s winter seasonal, Festive Ale, will be released. The beers in the Dundee variety pack rotate three times per year, ensuring craft beers drinkers continually experience something new.

“Dundee is committed to providing quality, affordable and approachable craft brews to the beer community,” said Texido. “We’re excited to share the new additions to our lineup and hope to continue to expand our offerings in the future.”

This fall, look for quirky beer-themed Halloween costume concepts and other seasonal entertaining ideas along with the latest Dundee news on the Dundee Twitter (@dundeebeer) and Facebook feeds.