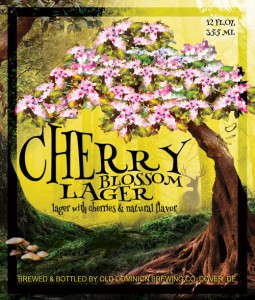 DOVER, DE – Due to the overwhelming positive feedback on its limited release last year, Cherry Blossom Lager will be released as Dominion Brewing’s 2013 Spring Seasonal.

Cherry Blossom Lager is conditioned on a bed of 300 pounds of Michigan cherries for 48 hours prior to packaging. Pale, Carafoam, Munich, and Vienna malts provide a crisp backbone, while the subtle addition of Perle and Tradition hops allows the fruit to transcend this delight. Blushing pink, effervescent, and tasting lightly of cherry champagne, it will be released in time for the Cherry Blossom festival in Washington, DC. For the label artwork, the brewery chose to interpret a passage from “Alice in Wonderland”.

Vice President of Sales for Fordham & Dominion Brewing, Casey Hollingsworth, stated, “What says ‘Springtime is here’ more than Cherry Blossoms? Keith Chmiel, who runs our DC Distributor (Capital Eagle), had the idea for a Cherry Lager last year and asked us to do a test batch, draft-only, just for Washington, DC. The brewers made it happen and the feedback was great-so we decided to make it our Spring Seasonal for Dominion in 2013.”

Cherry Blossom Lager will be available in six-packs and on draft. It will hit shelves and taps in the Mid-Atlantic region in March 2013.

Fordham has been brewing since 1995 and Dominion has been brewing since 1989. Together, they brew out of Dover, Delaware. They provide weekly tours of the brewery (located at 1284 McD Dr., Dover, DE) in conjunction with samples of their beers, such as Oak Barrel Stout, Double D, Rams Head IPA and Copperhead Ale. For more information, visit FordhamBrewing.com or OldDominion.com or contact Lauren Bigelow at 302.678.4810 ext. 201.